AIR AND SPACE MUSEUM OF BOURGET

During this group excursion in the vicinity of Paris, discover the Air and Space Museum, one of the largest and oldest museums in the world.

Located in the towns of Dugny and Le Bourget, this aeronautical museum traces the history of the conquest of air and space, through a planet of the richest collections in this world. With its thousands of visitors from all over the world, each year, the Air and Space Museum is a public establishment under the wings of the Ministry of the Armed Forces.

The Air and Space Museum was founded in 1919 by Albert Caquot, considered “the greatest of living French engineers”. The collection begins in a hangar in Issy-les-Moulineaux. The museum has undergone several relocations since, in particular due to the Second World War and the Occupation. Finally, the collections came to settle permanently at Le Bourget airport, around 1975.

In 1987, the Air and Space Museum underwent extensive renovations and now offers a “Grand Gallery” to its visitors. This gallery features original planes from early aviation and those from the First World War.

Inside the museum, there is also the famous “Concorde Hall”, entirely dedicated to this majestic supersonic airliner. The Air and Space Museum is the only one to have two Concorde planes.

In 2000, the “Hall of Space” and “the Planetarium” also experienced a refresh. Since 2008, it is now possible to explore the “Gallery of Models”, which was formerly placed in the museum’s storerooms. These reserves are accessible to the public once a year on the occasion of European Heritage Days, created by the Ministry of Culture.

This museum contains an impressive collection of machines, through time and innovations. During this group excursion to Paris, you will discover the various flying machines, dating from the 19th century, as well as many military devices, used in wartime.

The museum also has a large collection of rotary aircrafts, more commonly known as helicopters. You will also find a space dedicated to leisure planes, such as aerobatic planes or pre-war gliders.

Finally, the Air and Space Museum also makes you discover the most beautiful machines in space. From Ariane 1 and 5 rockets to shuttles and missiles, discover the different stages and models in the history of space. There is also a planetarium which allows you to rediscover all the planets as well as the solar system. This exciting and enriching place provides a profound immersion in the space universe.

Come and discover this historic and emblematic place of aviation. To do this, the Air and Space Museum pays tribute to several important personalities in the history of aviation through statues, which can be found in various parts of the museum. From Charles Nungesser to François Coli, not to mention Charles Lindberg, all of these aviation pioneers have made history with their knowledge and bravery. Many of them died in attempts to cross by plane, to participate in the technological advance.

Come and discover this sublime hangar with family or friends. Throughout the year, the Air and Space Museum offers many educational activities for young and old alike. Book your tour with our agency in order to live this experience in all serenity and in the best conditions. 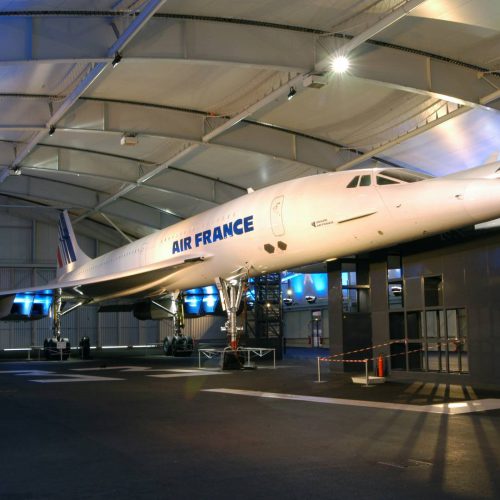 Be it or not a lover of aviation and the sky, this day dedicated to an industry that concerns us all will bring you closer to the professionals and enthusiasts who have forged this universe.

Departure by coach to the Air and Space Museum at Le Bourget airport, the site’s remembrance site.

On your arrival, you will be greeted in the hall of eight columns of the historic Paris airport, opened in 1919, long before that of Orly which opened its doors in 1961. Your guides, members of the association of friends of the museum of Air, specialists and real enthusiasts about aviation will present you the air pioneers, the 1939-1945 hall, the Concorde hall, the space hall or the story of space conquest, etc.

The morning visit will be followed by lunch on site, (Starter – main course – dessert – drinks – coffee) in the heart of the airport, at the foot of the runways, facing the planes.

In the afternoon, depending on the option chosen, you can visit the classic aircraft restoration workshops. In 2,500 square meters of space, you will discover the different trades and know-how of a team of experts dedicated to the renovation of equipment.

You can also go to the planetarium, where with the help of field experts, you get to immerse in the discovery of intricate constellations, the planets of our solar system and the Milky Way, while being comfortably seated.

Departure at the end of the afternoon from Le Bourget.