Its gothic cathedral, the astronomic clock, the French brushware

Experience full of surprises as your day goes by.

The town of Beauvais, located in Picardie, in Oise (60), is history packed and has a very rich heritage. Visit by foot or in horse-drawn carriage, this medieval town overflows with wonders such as the Jeanne Hachette’s square, the house of the 15th century, the Saint-Etienne’s church, the Saint-Lazare’s lazzaretto…

The cathedral of Saint-Pierre of Beauvais, a real gothic masterpiece of 48,50 meters height, is a must-see. It is captivating both by its architecture and its proportions. It represents a symbol of power.

Its construction started in 1225 at the bishop-count Milon of Nanteuil’s request in order to replace the former cathedral known as Basse-Oeuvre of the 10th century, partly destroyed by fire. Some vestiges remain.

The initial plans were modified several times because of large financing difficulties and conception problems. This is why it took so many years to build this cathedral.

This unfinished monument has stood strong despite many woeful times. Indeed, in 1284, part of the choir vaults collapsed. Large reparations were realised at the end of the 13th century and beginning of the 14th century. In 1573, the spire (150 meters tall) of the lantern tower, dated 1567, and 3 floors of the bell tower fell down! The cathedral is still subject to several repair works.

The revolution of october 1793 and World War II in 1940 did not spare the cathedral which suffered numerous damages.

Today, the building in front of you is a real sumptuousness!

The inside is also as imposing as the outside and will leave you speechless! The windows art of the 12th century are striking features, you will be able to contemplate the wonderful stained glass windows. The setting, mural painting, sculptures, the altar, the furniture, the cardinal Toussaint of Forbin Janson’s mausoleum, etc, offer an admirable end result.

The cathedral, classified as a historical monument in 1840, possessing the highest gothic choir of the world, is a pure glass and stone megastructure! It also contains a special jewel which will surely leave you mesmerised.

The clock was made between 1865 to 1868 by Auguste Lucien. The job of this famous bauvaisien clockmaker master is remarkable! It is astonishing because its stature is so impressive. A particular piece of furniture of the Romano-Byzantin style, 12 meters high and 6 meters wide, this work, realised after the Father Piétard‘ plans, who is the brother of the christian schools, attracts all eyes !

90 000 mecanique pieces of steel and brass, 52 faces in enamel and 68 synchronized automatons make up this unique piece. Each face reveals a precise  theme, as the solar cycle, the golden section, the ecclesiastical computation, the seasons, the lunar phase, the planet location, the hour of the sunrise and sunset…

You will assist a gripping show when the 68 automated figures come to life and stage the last judgment!

The guided tour allows you to understand the functioning, the lively history and the secret of this clock wonder, witness of a daring age.

The brush factory is situated on the Therain banks. It was created in 1845 by Alphonse Dupond at Beauvais.

During this period, the booming site counted 450 employees. The advent of globalisation was about to seriously affect the business, which saw itself in the obligation to relocate some production stages. Closure was almost inevitable.

Olivier Remoissonnet, brushmaking employee, could not accept the idea that this industrial heritage was going to disappear. In 2012, he took over the activity, deciding to repatriate the production device in France and doing everything to preserve this traditional savoir-faire.

The factory innovated and developed a new range of products in order to answer the needs and demand of the markets. The french brush-making industry picked up and makes, today, very high quality and recyclable articles. This allowed it to obtain the Ecocert, Origine France Garantie and Living Heritage Company labels.

Enter the inside of this amazing infrastructure, you will discover the history of the first french brush-making factory and its evolution over time! 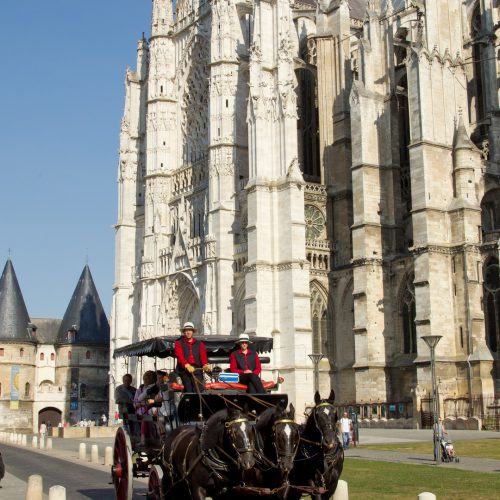 Departure by coach towards Beauvais, the capital of Oise.

Welcome by your guide, while part of the group will leave for a commented presentation of downtown Beauvais, comfortably installed aboard a horse-drawn carriage, the other part of the group will discover with its guide the Cathedral of Saint-Pierre de Beauvais Gothic masterpiece of surprising dimensions, the vaults are 48 meters high, the transept is 58 meters long, the windows 18 meters high without forgetting the stained glass windows and the astronomical clock.

Beauvais, capital of Oise, is part of the former administrative region of Picardy which is now attached to the Hauts de France region. Beauvais deserves your visit, especially the Place Jeanne Hachette, the former episcopal palace, the 15th century house, the Saint Etienne church, the Saint Lazare maladrerie, the rue du 27 Juin which escaped the bombings of the Second World War , or the Boileau tower.

Guided tour of the French brush factory, a company created in 1845

The French brush factory is 170 years old, a company of the past that has adapted to the demands of today’s consumer. From toothbrushes to hairbrushes, a know-how that combines the craftsmanship of the love of a trade with cutting-edge, eco-friendly industry.