BOAT RIDE IN THE LITTLE VENICE OF BEAUCE

A former monastery dating from 1122, the college of Thiron, located in Thiron Gardais, founded in 1630 by Henri de Bourbon-Verneuil, son of Henri IV, was intended to teach languages, arithmetic, geography, fencing, dance and botany.

Students from Perche, Beauce, Paris and neighbouring provinces flock to join the establishment run by teachers, monks and lay people.

Under the aegis of Louis XVI and with the help of the Count of Saint-Germain, one of the twelve royal and military colleges was founded in 1776. They later decided to transform and expand the establishment. The objective of this work was then to welcome young boys of the kingdom from noble families, but ruined so that they receive a decent education.

An anecdote tells that in 1778, Napoleon Bonaparte admitted to the college, preferred to join his brother Joseph at the college in Brienne.

On the other hand, the Marquis Bernard René Jourdan de Launay (1740-1789), an illustrious character emblematic of the history of France, governor of the Bastille, studied at Thiron Gardais.

The Revolution did not spare the establishment, which was forced to close its doors in 1793. From 1803 to 2005, the same family kept the buildings. The Regional Council of Eure et Loire is recovering them, but will not be able to maintain them.

The building fell asleep for 8 years before Stephan Bern journalist-host committed defender of French heritage decided to buy this historic monument during a site visit in 2013.

This lover of old stones signed an act in 2014 and undertook the necessary work for the restoration of this heritage. It took 3 years for the buildings to regain their appearance. A museum, installed in the old classrooms and dedicated to the history of the college and the abbey, will be inaugurated in 2016.

Through this museum visit, you will discover many objects brought together by Stéphane Bern, which bear witness to the daily life of the residents and the fascinating past of the royal and military college.

You can admire a portrait of King Louis XVI and the Comte de Saint-Germain, Minister of War, a uniform worn by the King’s students, a reconstructed classroom, a portrait of a 19th-century cadet.

The cross of Saint Bernard, from the Musée des Beaux-Arts in Chartres, owned by the founder of Tiron Abbey in the 12th century, is also on display.

Assisted by Louis Bench, renowned landscaper, Stéphane Bern works to revive the gardens near the abbey church. Some ancestral trees date from the Ancien Régime, others more recent, have been added to enhance the park.

This green setting, a true haven of peace, is also home to a labyrinth, one of the oldest greenhouses in the region, and other wonders that you will enjoy admiring.

Discover in an unusual way the charming medieval city of Bonneval (28) south of Chartres and board an electric boat to explore this exceptional village. An original and calming way to learn the history of the city, especially for children.

Bonneval, once called Bona Vallis, has developed over the centuries, but there are still many historical defensive elements dating from the Middle Ages.

This village, nicknamed “the little Venice of Beauce” because of the abundance of water in the heart of the town, contains many wonders.

At the controls of your boat, you navigate the canals in a pleasant and green setting while crossing ducks.

You will also be able to admire the unique architecture of the buildings of the Middle Ages, the successive washhouses, the viaduct erected in 1865, the impressive Porte Saint-Roch. The King’s Tower, the Gothic Notre-Dame church and the former Saint-Florentin abbey, founded in 857, which has now become a hospital center are worth a look.

You will take advantage of your free time to appreciate the charm of the alleys, to contemplate the environment, buildings and bridges. A must-see site to visit with family, friends or in a group. 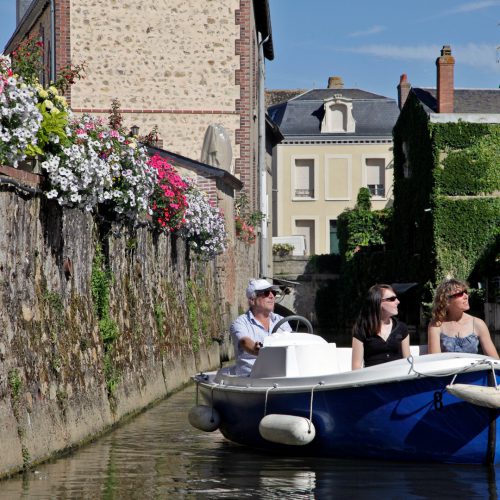 Departure by coach towards Le Perche towards the village of Thiron-Gardais where Stéphane Bern acquired and renovated the royal college and its gardens open to visitors.

It was in 1114 that Bernard de Ponthieu created a remarkable abbey that would become a high place of spirituality in Perche. Notables and greats, such as King Louis VI the Fat granted the abbey its royal protection.

In the 17th century, a college was founded there. Then, under Louis XVI, the college evolved and became a preparatory school for cadets at the Royal Military College in Paris, whose mission was to educate a poor young nobility.

Breakfast at the time of your arrival which will continue with a guided tour of the Royal college and a free visit to the gardens.

Lunch in a farm inn

You will continue the day in Bonneval, called the little Venice of Beauce. We invite you to discover a medieval city by electric boat in small groups on the Loir. A walk around the historic fortifications.

End of our services, free tour in Bonneval as per remaining time available.