A RENAISSANCE-STYLE JEWEL FROM THE XVIITH CENTURY

Forget your daily life and live an aesthetic and cultural experience that will remain engraved in your memories.

Bonnemare castle, a jewel amongst the French heritage

In the Municipality of Radepont (27) in Normandy, the castle of Bonnemare opens its doors to you to discover its wonders. You will be delighted by a visit to this building with its luxurious and refined decorations, part of the Norman heritage.

For the record, the legend holds that Raoul Bonnemarre, then a resident of the castle, madly in love with Marie de France, daughter of Baron de Canteloup, would meet a tragic fate.

Indeed, to win his hand, the tyrannical father would have asked Raoul to climb a terribly steep hill while carrying his beloved. The young boy managed to climb the slope but was so tired that he died of exhaustion. Not overcoming her grief, Marie de France threw herself into the void. The summit is called the Côte des deux amants.

Nicolas Leconte Marquis de Draqueville and friend of the King of France Henri II acquired the medieval manor. Between 1555 and 1563, he undertook the construction of the castle, the Renaissance-inspired chapel, the farmhouse and a cider house, and renovated the entrance rosary.

Philibert Delorme, renowned architect and inventor of the “small timber” framework realizes the architecture as you can contemplate it today! You will not fail to observe the framework and notice the singular shape of the roofs of the turrets which frame the house. This extraordinarily preserved 16th-century support is original!

Around 1637, Étienne de Fieux bought the estate. In 1668, he decided to partially renovate La Chambre de Parade, transform the farm buildings and enlarge the press also used by the inhabitants. Subsequently, several owners would follow one another.

In the 18th century the Cromelin de Villette family then Charles Le Blond, in the 19th century Louis Alexandre, Louis Cavelan. Finally, in 1888 the Palace became the property of Gustave Gatine, a notary in Paris who was none other than the ancestor of the current beneficiaries Sylvie and Alain Vandecandelaere.

Apart from the north wing, the castle of Bonnemare, the chapel and the châtelet are classified as historical monuments in 1992, the entrance pavilion and the outbuildings in 1991. You will understand all the splendour of the site as soon as you walk along the long alley of poplars leading to the porch.

The owners are proud to show you the place, its architecture and the curiosities it still holds, such as the rotisserie invented by Leonardo da Vinci in the huge kitchen or the imposing wine press with an 8 m long lever.

From the Chamber of Raoul de Bonnemare, of Marie-France, of the King, of Parade, and passing through Louis XVI, you will have the impression that time has stood still.

A few steps from the castle, in the heart of forest paths, the Domaine de la Chesnaie invites you to enjoy, in a warm atmosphere, a typical place, combining thatch and half-timbering.

This former Norman inn, located in the Andelle Valley, taken over in 2012 by Céline and Frédérick, is now dedicated to professional or private receptions: groups, associations, seminars, weddings, baptisms …

Lunch at the guinguette is offered. It is an opportunity to sing, dance, and meet beautiful people in a green and soothing environment far from the urban bustle.

You are sure to have a good time accompanied by a meal that will delight your taste buds!

A day combining cultural visit and festivity that will remain etched in your memories for a long time. 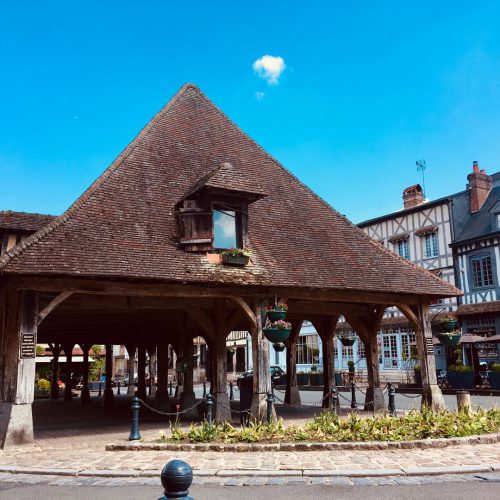 Departure by coach to Normandy, coffee break and croissant on the way, after a short passage to admire the village of Lyons la Forêt you will arrive at the castle.

Reception by your hosts at the Bonnemare castle in the village of Radepont which is crossed by the Andelle river and is located at the gates of the Forêt de Lyons. You will be in the heart of Normandy, so green and welcoming. The castle has been listed as a historic monument since 1992 and many people agree that Bonnemare is an architectural gem. Your guides, the owners of the estate, will present to you the history of this property and its remarkable architecture, including its châtelet, the main building, the 16th century Renaissance-inspired chapel. Do not miss a rotisserie designed by Leonardo da Vinci still in use.

The group will head to the Domaine de la Chesnaie, located a few minutes from the castle for a typical Norman-style lunch with a thatched roof. Also, during and after lunch, a guaranteed musical atmosphere, with songs and dance.

End of services and departure by coach