CHARTRES AND THE MAINTENON CASTLE

THE MARQUISE OF MAINTENON, THE SECRET WIFE OF LOUIS XIV

Located one hour from Paris, the city of Chartres is the gateway to the Loire castle. Chartres is also world-famous for its impressive Cathedral. Listed as a UNESCO World Heritage Site, the Cathedral of Notre-Dame de Chartres welcomes thousands of visitors from all over the world each year. You will be able to admire its Gothic architecture and its 2,600 m2 of coloured stained-glass windows, illustrating the Bible and the life of the various saints.

There is also a museum entirely dedicated to stained glass working techniques, at the International Chartres Center for stained glass.

On the banks of the Eure, the old town of Chartres houses the remains of this ancient medieval city. There are stone bridges, half-timbered houses that line the river, as well as old wash houses and even old water mills.

Located in the heart of the Eure Valley, just 18 km from Chartres, come and discover the sumptuous Maintenon Castle and its magnificent gardens.

The Maintenon Castle is made up of Small Apartments upstairs and Grand Apartments in which we discover the famous King’s salon or the former bedroom of Louis XIV in Maintenon. Discover an impressive collection of period furniture, belonging to the different owners of the castle, through the centuries.

The particularity of the Maintenon Castle also lies in its French gardens. The geometric and symmetrical shapes of this perfectly pruned and organized garden are the work of a single man: André Le Nôtre, gardener to the king from 1645 to 1700. Versailles, Chantilly, Vaux-le-Vicomte were all drawn by his talented hand. However, at the Maintenon Castle, he used a new element in his gardens: water, and tried to redesign the Eure river. He, thus, brought a touch of exceptional romanticism.

To this day, the current gardeners have reconstructed the French gardens according to the plans that the landscape architect Le Nôtre had devised in 1676.

Visit the Maintenon Castle in Chartres

To the delight of visitors, these gardeners have added multiple flowers thus offering 2 important blooms during the year: a summer and a spring. Depending on the seasons, an explosion of colours would emerge in the gardens of the castle. This living masterpiece becomes a real source of inspiration for visitors.

Not far from there is the Maintenon aqueduct. This is a project initiated by the King but unfortunately unfinished due to the War of the British Succession, which took place from 1688 to 1697. The purpose of this project was to supply water to the Palace of Versailles. Listed as a historic monument, it is possible to walk to the foot of the aqueduct and contemplate the magnificent forgotten arcades. 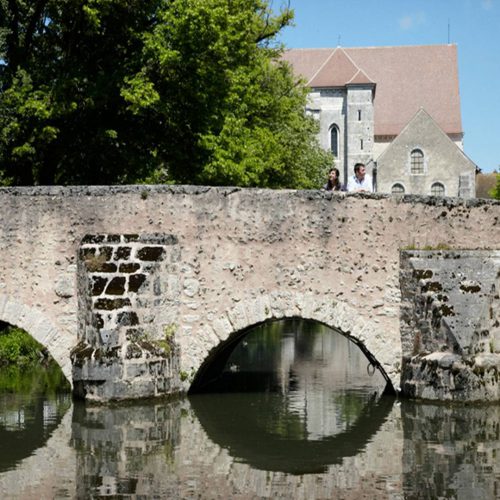 Departure by coach to Chartres

(Around) Coffee break and croissant

Estimated time of arrival in Chartres and start of guided tour of the Gothic Cathedral. It was built in the 12th century and completed in the 13th century, the length of the transept is 64 meters and its width is 14 meters. It was listed as a UNESCO World Heritage Site in 1979. Among its distinguished visitors, we will remember Henri IV, who was the only King to be crowned in Chartres.

As an option, we offer a tour in the little tourist train of old Chartres

(Around) Departure for the conference visit of the Maintenon Castle which is located about 20 kilometers from Chartres. The history of the castle dates back to the 13th century, which has continued to be embellished by its successive owners

One of its last occupants was the Marquise de Maintenon, secret wife of Louis XIV who acquired the castle in her old age.

By order of the King, the famous gardener undertook the plan of the park of the castle which gave these sumptuous French gardens

(Around) End of service and return.