Classified as world heritage by UNESCO

Treat yourself to a cultural tour and set off for the discovery of the regional heritage of Burgundy (21) in Yonne, a territory renowned for its exquisite sites and exceptional places!

This route invites you to explore prodigious buildings and villages classified among the most beautiful in France.

The guided tour of the Abbey of Fontenay, inscribed on the UNESCO World Heritage List in 1981 and the Basilica of Sainte-Madeleine in 1979, will create ever-lasting memories.

Fontenay Abbey: Back in time!

Overlooking the Cure Valley, encamped in the hollow of a valley, between Auxerre and Dijon, the Abbey of Fontenay, built in the 12th century, at the request of the monk Saint Bernard of Clairvaux, is the oldest in Europe. A masterpiece of Cistercian art and Romanesque architecture, the monastery stands out before you with its 900 years of history!

You will discover a preserved natural environment, French gardens as well as a set of the abbey and monastic buildings, the abbey church, the cloister, the chapter house, the dormitory, the forge, the monks’ room…. Despite looting, wars and revolutions, the whole has managed to maintain a remarkable state of conservation.

The Abbey experienced great upheavals, especially after the French insurrection of 1789. The monks left the premises and the protesters sold it in 1791 as a national property.

Its first buyer, Claude Hugot, made changes and the Abbey became a paper factory. In 1820, the Montgolfier brothers developed the factory. In 1906 Édouard Aynard, son-in-law of the Montgolfiers, destroyed the stationery buildings and undertook renovation work. Fontenay regained all its medieval splendour in 1911.

Since then, the site has belonged to the same family that strives to safeguard this remarkable heritage. 100,000 visitors flock each year to admire this haven of peace, striking both for the authenticity and the special aura that emanates from the place.

Sainte-Madeleine Basilica: A stopover in the Middle Ages.

Vézelay, a Sanctuary city rich in history, spirituality and a starting point for Santiago de Compostela, will enchant you! The typical alleys, Romanesque houses, ramparts on the covered way transport you through time.

Called the Eternal Hill, this site also contains a building combining Romanesque and Gothic art: the Basilica of Sainte-Madeleine erected between 1120 and 1150. A visit to this monument, with its landscaped park classified as a “Remarkable Garden” in 2004, promises moments full of emotions.

The fame of this former abbey church was forged in 1037 when Abbé Geoffroy acquired and exhibited the relics of Mary Magdalene and made it a high place of pilgrimage. It was also the beginning of the crusades led by Bernard de Clairvaux (Saint Bernard), Philippe-Auguste, Richard the Lionheart, Louis IX …

Eugène Viollet-le-Duc (1814-1879), an architect, saved the emblem of Christianity from demolition then from the damage caused by the revolution in 1793 and the fire of 1819. This genius wished to rehabilitate the monument of the time, and the restoration work would last 19 years!

The exterior and interior architecture reveals the supremacy of the builders of the Middle Ages. You can only be in awe after seeing the western facade decorated with statues and the two towers. The style, sculptures and different parts of the basilica, namely the central portal of the narthex and its tympanum, capitals, nave, vaults, choir, transept and the crypt will captivate your attention. The Municipality, the owner of the Vézelay site, welcoming thousands of visitors each year, works to preserve the universal value of the basilica and public spaces.

Close to these two high places, Noyers sur Serein, classified among the most beautiful villages of France, is full of charm and is worth the detour.

This tour, which is a true invitation to relaxation, culture and discovery of our regional heritage, awaits you for a unique and incredible experience. Book quickly! 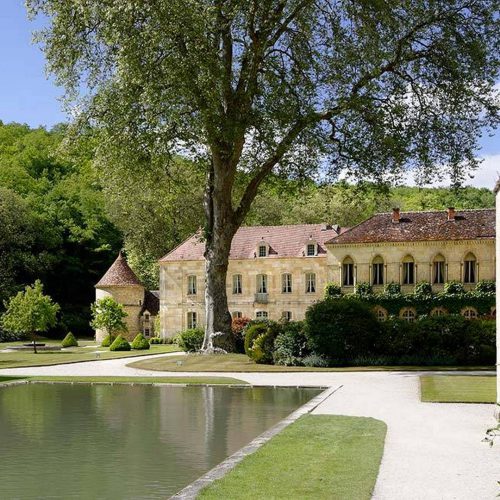 Approximate time of departure depending on your location; departure by coach from Paris towards Fontenay Abbey with a coffee break on the way.

Meet-up and start of the guided tour of the Abbey of Fontenay, built in the 12th century following the specific architectural and decoration model of the Roman Catholic Cistercian order, which has its origins in the Abbey of Cîteaux founded in the 11th century. The abbey has been listed as a World Heritage Site by UNESCO since 1981. While the abbey enjoyed great prosperity, wars of religion led to its decline. It was sold after the French Revolution and restored by its new owners at the start of the 20th century. As a family property, the abbey is maintained with the sole aim of guaranteeing visitors the most authentic possible experience of the estate.

Lunch at the restaurant, where typical local cuisine will be served, with drinks included.

Road to Vézelay, where you will visit the famous Sainte Marie Madeleine basilica overlooking the valley of Cure and the Morvan national park. The basilica and the hill, both were classified as World Heritage by Unesco in 1979.

From the car park, you will reach the top of the eternal hill, crossing the village of Vézelay with its narrow streets and old typical winegrowers’ houses.

Your guide will introduce you to this 12th-century building with Romanesque architecture, completely renovated by Eugène-Emmanuel Viollet le Duc in the 19th century. You will enjoy visiting both the interior and exterior of the basilica.

The visit will end with the tasting of a local Vézelay wine.

(Around) Return by coach