An exploration of the Marne battle of 1914

Guided visits to memorable places are exclusive adventures that allow us to remember, to understand the history in a new and instructive way and to pass down this history to the new generations.

The Great War Museum is located in Meaux, in Seine-et-Marne (77), only 50 kilometers from the East of Paris. It is a historical and educational site, open for everybody and perfectly adapted for children.

Its construction was possible through Jean-Pierre Verney, a historian. For almost 50 years, his passion allowed him to gain cognizance of a large number of artefacts and documents recounting the World War I events.

In 2005, the commune authorities of Meaux acquired all the private collections of this memorialist in order to create a museum dedicated to the War of 14-18. This contemporary building, established as the Museum of France in 2007 and inaugurated on the 11th November 2011, is the largest museum in Europe.

Almost 3000m² of space are strictly dedicated to the Great War. During your thematic and chronological route, you will discover more than 7 000 unique and remarkable pieces ! You will be able to see uniforms, weapons, artillery accessories, military machines, newspapers, posters, letters… which are exhibited and highlighted by an interactive scenography.

This visit, which is poignant and packed with emotions, defines itself as a real living experience. Multimedia devices are provided for in order to immerse yourself in the heart of the action: bombings, planes, soldiers’ songs,  panaromic pictures, snapshots of the soldiers’ life in the trenches…

A few kilometres from the museum, several places of contemplation and commemoration are also part of the landscape.

Travelling by coach, this path will lead you towards funeral monuments, which epitomize the immense Marne battle. This World War I short conflict took place from the 6th to the 9th September 1914.

You will observe Charles Peguy’s headstone, writer killed on the 5th September 1914. It is located close to the Great Grave of Villeroy, where he was buried with other soldiers, Notre-Dame of the Marne monument, military and civil cemetery…

In September 1914, the German army advanced on the Marne. Being threatened, the government left Paris to go back to Bordeaux. That was when the marshal Joseph Joffre decided to make a counteroffensive towards the Ourcq. It was necessary to transport the troops sent in reinforcement in Paris.

The trains were insufficient, the general staff decided to mobilize the parisian taxis. On the 6th and 7th of September 1914, 1 300 taxis drove thousands of fighters to the battlefield. The invasion plan, developed by the Germans, who were convinced of their victory, failed. The german troops didn’t expect this attack, and consequently, retreated. That is how the miracle of the Marne taxis was born.

The Brie cheese of Meaux : Enjoy without moderation !

An interesting halt is waiting for you in the House of Brie cheese of Meaux, open since 2016. You will discover the story about this famous cheese, exclusively prepared from untreated unpasteurized milk, which comes from cows farmed in the outdoor plains of the region.

The scenographies explain to you the different stages of the production, to the cellars for maturing and refinement. This cheese obtained a Protected Designation of Origin (PDO) in 1996.

Could you imagine that Charlemagne adored it, that the king Henry IV savoured it on bread and that Charles d’Orléans gave it to the court ladies? In 1815, in the Vienna congress, this cheese, served during the meal, was so successful that it was elected the ‘King of cheeses” !

Allow yourself to be seduced by this experience and prepare yourself to taste this gastronomic speciality which became the pride of the brotherhood of companions of Brie cheese of Meaux! 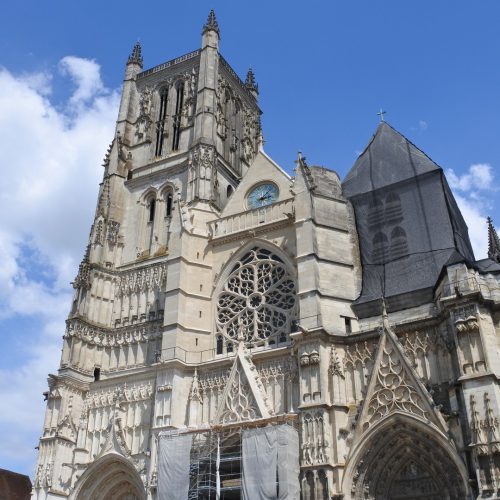 Departure by coach toward Meaux

Do you know about the all-out-war ?
At the base of the museum’s origin, there was a passionate historian who decided to make a collection of tens of thousands objects and documents on World War I. In 2005, the commune of Meaux decided to buy all the collection and approve the museum building which was inaugurated in 2011.

If you are interested to learn more about the rugged times of WWI, you will be surprised by this adventure! The Great War Museum in Meaux is, unquestionably the largest in Europe. It is a real educational tour for the younger generations, a chronological or pedagogic immersion of one of the most painful moments for French people and our near allies.

Lunch in a restaurant. Menu with 3 aperitif assortments, drinks and coffee.

Aboard your coach, this guided trip will drive you through almost 10 sites of the Marne battle in 1914

For around 2 hours and 40 kilometers, you will observe several sites, especially in the Great Grave, where the writer and poet Charles Peguy is buried.

Paris is situated around 40 kilometers away. Reinforcements were sent from Paris, a memorable transfer of fighters called the Marne taxis.

The Franco-British troops stopped the Germans who were confident that they would succeed to invade France, but the history to be decided otherwise…

To change the atmosphere, a well-deserved halt will be made at one of our French jewels.

The group will then stop at the Brie cheese house of Meaux for a presentation of the production process. After, you will be able to savour the taste of this exquisite cheese PDO (Protected Designation of Origin)