Visiting the mound of Vauquois listed as a historical monument

Visit of the mound of Vauquois, a site listed as a historical monument of the 14-18 War

The wars left deep scars in some regions of France. A guided tour in this region is an immersion right in the heart of the life of soldiers and civilians, dead or injured during the war confrontations.

Memory tourism in these french sites will allow you to discover one of the most striking historical places touched by World War I in 1914-1918: The Vauquois mound in Argonne (55)

During this visit, you will be completely immersed in the guts of the hills, situated between Verdun and the Argonne, unfortunately famous for this dramatic incident.

A heavy artillery for a pitiless struggle!

In August 1914, Germany declared war on France. This small village of Vauquois was not spared. Laid on a small hill, its geographic location is a natural strategic observation point for both camps.

In September 1914, Germans appropriated and occupied the hill to make it a fortress. From October 1914 to February 1915, the first responses with bayonets made the french lines retreat themselves towards the south of the hill. Starting from the 17th of February and to the 4th of March, the German resistance ended up wearing themselves out through a succession of attacks from the French.

The Germans and French dug kilometers of galleries underground, in which many landmines were buried to inflict heavy damage on the enemy. This maneuver is called the landmines war. This turned the Vauquois hill into an incredible termite mound.

The battle has marked the Argonnais and Meusien territories forever. 14 000 soldiers lost their lives in these regions! The trenches, built by sappers-miners, seem to have stopped our timeline as if the sulfur, soil, and explosive smells were still there.

In wartime, all possible means were deployed to eliminate the opponent: landmines, flamethrowers, gas, varied explosive devices. There were 519 detonations (199 counted for the Germans, and 320 for the French).

In may 1916, an explosive charge of 60 tonnes was stored by Germans and struck the far west of the mound, which caused the death of 108 soldiers. In August 1916, powerful explosions underground ensued.

At the end of 1917, the Germans and French stopped the galleries’ construction work but continued to maintain them. In March 1918, a last french landmine burst in Vauquois and the last german response took place in April 1918.

The liberation of the mound on the 26th of September 1918 by American soldiers would last just a few hours. The Vauquois village was entirely devastated, the small hill was completely bisected and the monstrous craters form a lunar landscape. In 1919, a new village was rebuilt at the foot of the small hill.

The Vauquois mound has, since, still been preserved by the Association of Friends of Vauquois. The vestige of the landmines war, which lasted more than 4 years, has been perfectly conserved. A monument in memory “For Vauquois fighters and deads” replaced the city hall of the former village.

Go to the discovery of this site! It will continue to promote our heritage and contribute to support new generations to preserve and pass on the history of France. Be it with your family, school group, work for council or association… book this instructive guided visit, this adventure will mark your memories! The guided tour program is defined as follows : 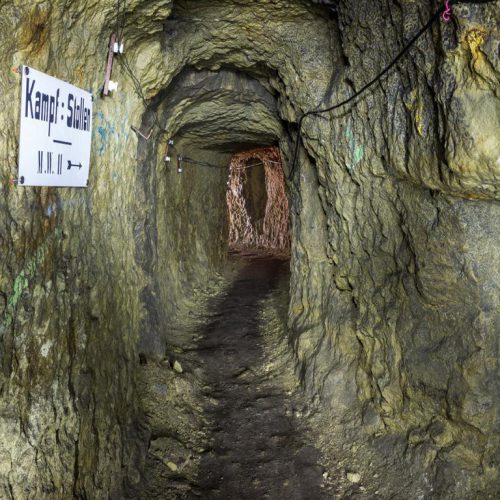 Early departure in the morning in the direction to Lorraine. You will have a break in between so you can appreciate your breakfast.

Guided visit of the Vauquois mound; the outsides in total freedom, but on the other hand, the visit of the gallery will be guided. It will present to you the Germans’ and French’s underground installations as well as the museum. The Vauquois small village drew its name to one of Vauquois’ sad battles, costing the lives of around 14 000 soldiers.

There were 519 explosions (199 Germans and 320 French people). The landmines were planted deeper and deeper, therefore, the charges were more and more important. The Vauquois hill is a gigantic termite mound: with 17 kilometers of galleries and 184 rooms that constitute the German barracks. Almost 5 kilometers of galleries, with some command posts, are dug on the french side.

After a morning charged with heartfelt emotions, the group will be invited for lunch in a local and friendly atmosphere in the area.

Dinner party and night in Verdun. Let aside the heavy toll taken by Verdun and nearby regions, it is above everything a pleasing town to stroll, to stay and have something to eat. Crossed by the Meuse, the town is welcoming and lovely. A relaxing evening is awaiting you.

After a good breakfast in the hotel, the group will head to Epernay. Aboard the little tourist train, you will like the panoramic guided audio visit, which lasts 45 minutes. It will guide you across the main arteries of Epernay, with its champagne avenues enrolled among UNESCO’s World Heritage sites.

After lunch, you will visit a famous and traditional champagne house and a traditional and familial champagne cellar. You also will be able to travel the Epernay vineyards by coach. These vineyards will be presented to you by a guide.