Undergrounds galleries of the citadel

Laon : Over 6 century of history

In the department of Aisne (02), you will discover a town with protected areas that has an exceptional architectural ensemble. Indeed, with 80 historical monuments, including 68 classifieds, Laon, located in the Hauts-de-France region, will enchant you.

The guided tour of this site with its unique character, also considered amongst our regional heritage and places of memory, promises a superb getaway for family, lovers, friends or in groups.

The city is divided in two: the lower part on the rather modern plateau and the emblematic upper part, an old medieval city, perched on a mound. Eight kilometers of ramparts enriched with towers and openwork with 3 monumental gates, notably, Chenizelles, Arlon and Soissons, adorn this citadel built at the request of Henri IV between 1595 and 1598.

The strategic location of this crowned mountain with its particular relief remains a privileged and ideal defensive site. Laon will experience the Battle of Bibrax led by Caesar, the Hundred Years War, Napoleon’s last fight in 1814, the occupations of 1870 and the bombardments of 1944. Fortunately, the almost preserved historic heart of the region has survived time.

The majestic Notre-Dame cathedral, steeped in history, built at the request of Bishop Gauthier de Mortagne from 1150 to 1230 is visible for miles around. The statues of oxen that adorn the western facade are altogether surprising, as are the gargoyles, rhinoceros and hippopotamus heads!

You will undoubtedly appreciate the Episcopal Palace, the Hôtel Dieu, a perfectly preserved former hospital, the Saint-Martin church, the Templar chapel, the court of the Dauphin, the leaning tower and even ancient abbeys. The art and history permeating these architectural wonders are bound to grab your attention.

As you walk along the ramparts, you can enjoy magnificent views of the lower town and the surrounding plains.

The fortifications, the cobbled streets, the gardens, the old quarters, the interior courtyards, the half-timbered houses without forgetting the rue Châtelaine decorated with trompe-l’oeil paintings will also amaze you. Open your eyes wide! The medieval city has many surprises in store for you.

Laon, which became a royal city and capital of the Carolingian Empire under Charlemagne, is home to another treasure: the underground galleries of the citadel. The corridors of time!

A real informative and fun immersion awaits you in the underground passages thanks to the audio and visual devices set up for visitors. You immerse yourself in the heart of the geological and political history of Laon, from its origins forty million years ago until the middle of the 20th century. This course will delight both adults and children.

These cavities were exploited to extract the rock necessary for the construction of buildings, in particular the cathedral. Over the centuries, the quarries and galleries will serve as market gardening cellars, troglodyte dwellings, coolers or even military shelters during the confrontations of the Second World War.

You take successive corridors that tell you the tumultuous history of the place without forgetting the old powder magazine, where gunpowder was stored.

During this tour, you will come across illustrious figures who have marked the city, Cerith fossils, a Gallo-Roman silo, traces left by man in stone and many other secrets. Victor Hugo said “Everything is beautiful in Laon, the churches, the houses, the surroundings, everything! “Come and judge this adage for yourself by reserving this day and get ready to live a remarkable experience! 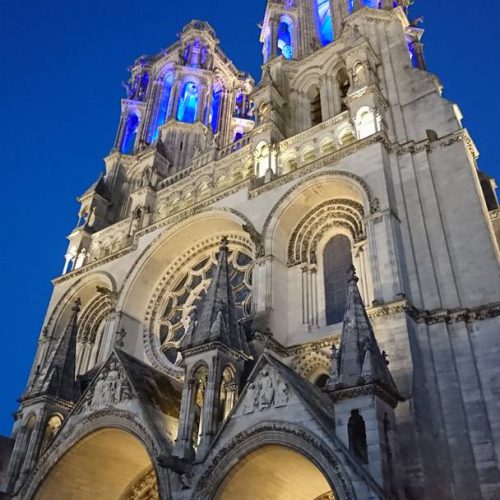 Departure in direction of the Laon citadel. Once onsite, you will be welcomed by your guide who will accompany you all day. The upper town is perched 100 meters high. It was under Charlemagne, a royal city and the capital of the Carolingian Empire.  Laon city is located 140 km from the capital, at the gateway to Champagne.

A coffee and croissant break will be offered to you before starting the visit.

visit the underground galleries of the citadel

During the Great War, Laon served as a base for German troops during the great war and the second world war. Equipped with an audio guide, you will appreciate the scenography which relates to “the secrets under the city”. For approximately 1 hour, you will walk through the underground galleries that will take you back in deep history till 40 million years ago.

Lunch in a restaurant in the city center

Guided tour in the medieval city of Laon, positioned at a height allowing you to see up to 20 km around. You will cross the city and will be able to appreciate its historical evolution through its buildings and infrastructure- the Notre Dame cathedral, in Gothic style, from the 12th and 13th century, the old episcopal palace which now houses the courthouse, the ramparts, the fortified gates and its typical streets and alleys.