How about a change of era and spend a day, with your guide, in one of the most beautiful villages of France, just 2 hours from Paris?

This fabulous excursion in Burgundy in Yonne in the heart of the Morvan has many treasures in store for you.

Noyers-sur-Serein, located to the southeast of Auxerre, will charm you at the very onset of your arrival. This town, where the wine and grain trade flourished, protects numerous buildings classified as Historic Monuments and offers an absolutely magnificent setting.

The lords of Noyers resided in the city during the 12th century. After a long period of inactivity, the city came back to life thanks to the Duke of Luynes when he married, in 1710, with the last descendant of the Condés.

Each half-timbered house, bourgeois mansion, fortification, aristocratic hotel and chapel tells you 10 centuries of history. In this medieval city, known for its famous castle destroyed by the order of Henri IV, time has literally stood still!

This authentic place, surrounded by 23 towers in the 13th century which give access to the center of the village, today has 19 towers. The Tower of the Wolves Cave and the old ramparts pierced by three doors- the Painted Door to the south, the Porte de rue Franche and rue de la Venoise – reveal a mesmerising medieval past.

Walking through the cobbled streets, you will discover the superb Place des Arcades, the 17th-century town hall with its Baroque facade and Gothic style, and the magnificent Gothic Notre-Dame Church, built between 1491 and 1515.

You can also admire the Golden Fleece, a noble residence built in the 15th century in a Renaissance style, the Place de la Petite Etape aux Vins, and the Yellow House where Bourvil and Louis de Funès shot a scene from the film “La Grande Vadrouille”.

Not far from Noyers-Sur-Serein and about ten kilometers from Avallon, you will visit the village of Montreal! Overlooking the Serene, this former feudal town with civil, military and religious architecture will surely entice you.

Montreal bore the name of Mont-Royal following the stay of the Queen of the Franks Burnehaut (Brunehilde: 547-613) and her grandson Thierry , during the 6th century. From the 11th to the 13th century, the Anséric family reigned over the town. Then, it was the turn of the Grand Dukes of Burgundy. In 1542, King François 1st governed the states of Burgundy.

Montreal underwent a series of decadences during the Hundred Years War in 1337, after the passage of Edward III, King of England in 1360, then the conflicts between the Armagnacs and the Burgundians in the 15th century. The war had heavy tolls on the village which saw itself steadily deprived of inhabitants.

The town now has vestiges from the medieval period as evidenced by the two fortified gates: Porte d’en Haut and Porte d’en Bas.

The Collegiate Church of Notre-Dame, erected by the Anséric in the 12th century, a splendid Romanesque and Gothic building, near the old castle, is a true masterpiece. Its immense facade, rose window, portal dating from 1200 demonstrate the grandeur of the builders of yesteryear.

Take advantage of the guided tour of Montreal, with its houses adorned with 14th and 17th-century turrets or watchtowers with colourful gardens, picturesque alleys and wells, and treat yourself to a breathtaking view of the countryside.

You will continue this route by discovering Vézelay, the seat of Christendom since the Middle Ages, gathering point for the pilgrimage to Saint Jacques de Compostela.

Vézelay is home to a jewel of Romanesque architecture: the majestic, emblematic and symbolic Sainte Madeleine basilica, built between the 11th and 12th centuries, impresses visitors from all over the world.

This building, with splendid decorative vaults, saved from destruction in the 19th century by Viollet-le-Duc, would contain the relics of Marie-Madeleine.

Founded on the road leading to Santiago de Compostela, the basilica attracts thousands of people every year and you will understand, at the end of your visit, why UNESCO has listed the village and the monastery in the world heritage directory.

Did you know that Richard the Lionheart and Philippe Auguste started the 3rd Crusade from this monument?

Vézelay remains a pure pleasure for the eyes! The ramparts, the House of the writer Jules Roy, that of Romain Rolland, the Viollet-le-Duc Museum of Work, the old winegrowers’ residences, the Roman cellars … Come, learn and relive history through these 3 most beautiful villages in France! 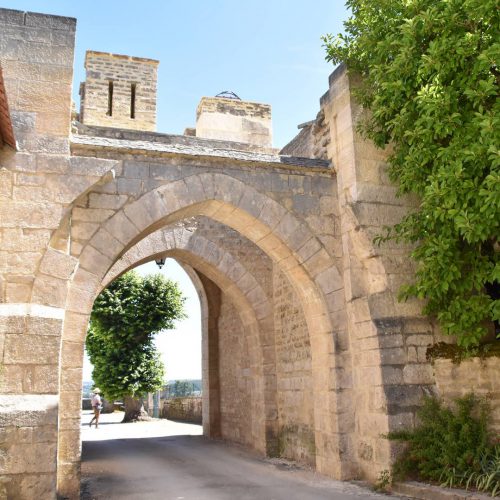 Then the group will take the direction of the medieval villages of Noyers sur Serein then that of Montreal. Accompanied with your guide, you will especially appreciate the Burgundian architecture with old half-timbered buildings.

Lunch in a typical Burgundian restaurant with aperitif and drinks included.

After lunch Departure by coach for Vézelay. The village of Vézelay, surrounded by vineyards, reigns from the top of the hill over the Cure valley.

Accompanied by your local guide, you will cross the alleys of the village of Vézelay where old houses remain. Its geographical location naturally gave it a stopover for professional travellers, traders or pilgrims.

The visit will continue with the presentation of the essential Sainte Madeleine basilica, completely restored in the 19th century by Viollet le Duc. It became a Basilica in 1920.

The visit of Vézelay will end with a tasting of a grape variety of Vézelay wine, then, return by coach to your home.