The Basilica of Vezelay, a UNESCO world heritage

Get ready to spend an extraordinary day of discovery

Just 1.5 hours from Paris, Auxerre in the Yonne department (89) brings together places rich in art and history. The city has an exceptional and priceless regional heritage!

Whether you are passionate about culture, architecture or monuments, you are going to live a special experience. The guided tour of this authentic city, both historical and instructive, has many surprises in store for you.

These two buildings are among the must-sees in Auxerre and are not to be missed both for their beauty, styles and the mysteries they contain.

The Abbey of Saint-Germain, a necropolis of the vicars, forms a remarkable architectural ensemble combining Carolingian, Romanesque, classical and Gothic buildings. Holder of 16 centuries of epic history, it houses a museum that showcases life in Auxerre from prehistoric times to medieval times.

This former monastery will reach its peak in the 9th century thanks to the monastic school of Auxerre, founded in 840, one of the most decisive in West Francia and the Christian West.

During the eleventh and fourteenth centuries, major renovations were regularly undertaken with the aim of asserting the abbey power of this building. The crises of the XVIIth – XXth centuries and the revolution will not spare the buildings which will undergo numerous degradations.

The Carolingian frescoes from the 9th century, the cellar of Saint-Germain, its vaulted rooms where the activity of monks appears, the sculptures, and even the paintings are altogether fascinating! You stay in ecstasy in front of the furniture classified as a Historic Monument.

A few yards away from the clock tower, in the city center of Auxerre, the Saint-Etienne Cathedral, a masterpiece of Gothic art and protected as a Historic Monument since, will also impress you!

Dedicated to Saint-Étienne, the first martyr of the Church, the construction of the current cathedral on the site of the Romanesque building dates from 1215. Only the 11th-century crypt remains where the mural of Christ on horseback is found, the cross of Luca Pénni and many collector’s items.

Its facade adorned with numerous sculptures depicting scenes from the life of the period and its portals with remarkable bas-reliefs is a real pleasure for the eyes. Without forgetting the stained-glass windows from the 12th, 13th, 14th and 15th centuries, the best preserved in France, the choir, the tympanums of the transepts and the great organ.

Your guide will reveal to you anecdotes, details of the ornaments and the countless treasures hidden in the corners of the cathedral.

After having contemplated these wonders, you will take the coach which will take you, through the Cure Valley, to Vézelay in Burgundy, at the gates of the Morvan Regional Natural Park.

Throughout this route, magnificent views await you: exquisite natural sites, superb landscapes of hillsides and vineyards …

The village of Vézelay, the most beautiful village in France and the starting point for Saint-Jacques-de-Compostelle is famous for its Sainte Marie-Madeleine Basilica, surrounded by ramparts.

Let yourself be dazzled by its impressive silhouette and size: 120 meters long! This building has stood the test of time in spite of events and torments. The western facade adorned with two towers and statues is a real gem.

With your guide, you will discover other treasures behind the walls of this majestic building completely restored by Viollet-Le-Duc in the 19th century. The central tympanum of the narthex, the nave, the crypt, the murals, the columns surmounted by superb sculpted capitals, the Gothic-style choir transport you out of time.

Each year, nearly a million visitors, comprising both tourists and pilgrims, come to explore with wonder the emblematic Cathedral of Vézelay. Do not miss this great opportunity too! 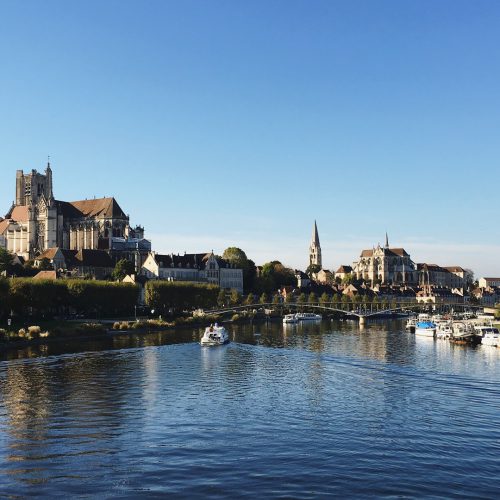 Departure by coach with coffee break and croissant on the way

Welcome by your guides in Auxerre for a guided tour of the Abbey of Saint Germain.

A visit to the old Saint Germain abbey, founded in the 6th century, is one of the essential visits to Auxerre, including the Saint-Jean tower, which is the old 12th-century bell tower, and its remarkable archaeological crypt. You will also appreciate the 9th-century frescoes, the cellar of Saint Germain, and the vaulted cellars where the activity of the monks is presented.

The morning will continue with a guided tour of the Gothic-style Saint Etienne cathedral built in the 13th century. You will appreciate among other things its flamboyant-style facade and its 12th century stained glass windows.

Lunch with aperitif and drinks included

After the meal, you will take the road to Vézelay through the Cure valley, a tributary of the Yonne. This approximately 60-kilometre route will take you through charming villages, hilly landscapes and vineyards.

You will arrive in Vézelay at the gates of Morvan. The basilica is located at the top of the hill which dominates the valley of Cure and it offers a formidable panorama.

In the company of your guide, you will discover the Saint Marie Madeleine basilica which was an essential stopover for pilgrims going to Saint Jacques de Compostela.

The basilica is a UNESCO World Heritage Site.