MARINIERS OF YEARLY TRACTION BY HAULAGE

The castle of Sully-sur-Loire located in the department of Loiret (45) dominates the Loire and the city.

This building, classified as a historic monument in 1928, contains 7 centuries of history and treasures. Let yourself be immersed in the discovery of these amazing places without further delay.

This route allows you to visit the house which was inhabited by the first lords of Sully, the Trémoïlle family, then the Béthune family.

Did you know that famous people like Joan of Arc, Louis XIV, Anne of Austria, Voltaire, amongst others, also stayed at the castle?

The first traces of the castrum dedicated to controlling a bridge over the Loire date from 1102. At the beginning of the 13th century, Philippe Auguste obtained the fortress and had a main tower built. In the 14th century, a strong flood devastated this tower. Guy de La Trémoïlle (1346-1391), Lord of Sully, then undertook major repairs.

He called on Raymond du Temple, architect of the king. Around 1375, a keep was built to defend the bridge. This building will also be used for sumptuous receptions. It was not until a few decades later that the small castle was built.

In 1602, Maximilien de Béthune (1559-1641), Marquis de Rosny who became Duke of Sully and advisor to King Henri IV acquired the castrum. 7 years of work would be necessary to achieve an exceptional result! For four centuries, the castle would remain occupied by the same family.

In the 18th century, the Philippe Auguste tower, dating from 1218, was ransacked, the drawbridge and the old stables were destroyed. The revolution, the fire of 1918 which destroyed the wing of the 18th century and the bombings of 1940 and 1944 seriously damaged the fortifications.

In 1962, the Department of Loiret became the owner of the castle and the park and has since carried out numerous restoration works in order to restore it to its aesthetic value.

Despite its setbacks, the medieval castle of Sully-sur-Loire with its massive towers and its silhouette surrounded by a moat has preserved its treasures. You will be able to admire the magnificent 14th-century cradle frame, the rampart walk, a Psyche Hanging, not to mention the works of art, furnished apartments, the hall of honour and the tomb of the Duke of Sully.

After this emotion packed tour, spend a moment of relaxation at the port of Grignon! An atypical walk awaits you on the Orleans canal located in the village of Vieilles-Maisons-Sur-Joudry (45). You will embark aboard a barge responding to the sweet name of “Belle de Grignon”, a true cultural medium.

Since 1676, the port of Grignon has been the starting point for the Orléans canal which links Paris to the Loire basin.

The sailors of Grignon had an excellent idea of building a replica of a Berry flute in 2009, a fluvial heritage that once sailed on the Berry Canal and the Orleans Canal. The will of these enthusiasts made it possible, after 10 years of work, to launch in 2018 this emblematic 19th-century wooden barge of 27 meters and 20 tonnes.

The Belle de Grignon team is proud to welcome you to a perfectly landscaped site, equipped with mediation devices and a film screening area retracing the history and the various stages of construction up to the launch water.

Non-motorized, the boat is pulled by a hauler using a rope! This old mode of traction requires manipulation using arm force. You are going to witness an ancestral work method.

The Association des mariniers has the ambitious plan to join from 2022, still by hauling, Montargis and Briare and then Orléans.

Live with these volunteers a real human adventure punctuated by stories and friendly sharing.

Reserve this exciting and rewarding day that will remain etched in your memory for a long time. 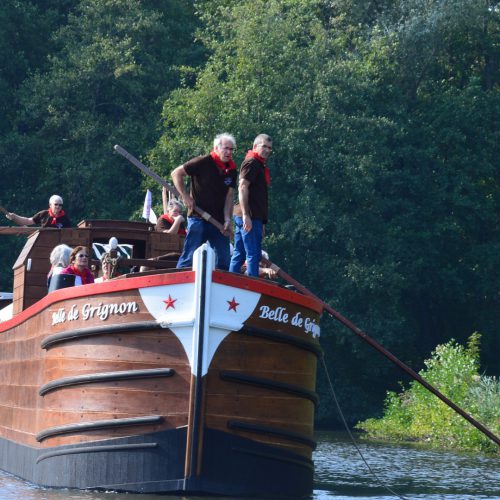 (Around) Departure by coach for Sologne towards Sully-Sur-Loire, the gateway to the Loire Valley.

A breakfast break on the way will be offered to you included in this programme.

You will be greeted by your guide at the Château de Sully, listed as a historic monument since 1928. This imposing fortress dominates the Loire and is divided into two parts; the keep and the small castle. During the visit, you will appreciate the imposing broken barrel frame.

The afternoon will continue towards the Orleans Canal at Port de Grignon.

Thanks to the initiative of the sailors of Grignon gathered in association, the “belle of Grignon”, a 19th-century barge of 27 meters was born in 2018 after 10 years of work; an emblematic material of the Orléans and Berry canal which evolves by towing thanks to ropes and men.

You will continue the presentation made by the sailors and on a giant screen aboard a Berrichonne flute in small groups hauled by the sailors of Grignon. The pulling is done by means of a rope and the only force of the muscles.

(Around) Departure by coach.