An organised visit of the General de Gaulle’s last home

Colombey Les Deux Église is a town situated in the North-East of France, in the Haute-Marne (52) department in Eastern region. This village owes its fame primarily to the General de Gaulle.

The question remains; why has General de Gaulle chosen this locality, when a head of state had the privilege to reside in prime locations such as Vizille, Rambouillet or even at the Grand Trianon in Versailles?

The tour guide of Colombey Les Deux Églises indeed helps us to understand his choice and to step in the shoes of Charles de Gaulle’s, also called the 18th June man or the 5th republic founder. His cult sentence « I understood you ! » elocated during his speech of the 4th June 1958 at the Algiers Forum reverberates even in our modern days…

For years, the tourism of the memory gives the possibility to the visitors to discover sites of historical interest and the stories that marked the making of this great nation. This visit, not-to-be-missed, is an immersion rich in revelations on the life of General de Gaulle (1890/1970)

The De Gaulle family were searching for a peaceful and serene place. They wanted to enjoy a calm way of life in retreat from towns and cities. General De Gaulle has his heart set on a family property, built in a park covering over 2 hectares. The property had an old brasserie, named La Boisserie within its premises ; a perfect fit for the family, given the authenticity, design and vintage look of the residence. They settled there on the 9th June 1934. There settlement in the region sparked development in the village, which over time built itself a global reputation.

The geographic location of his secondary residence allowed him, during times of war, to be located halfway between Paris and his troops. It was not the only advantage ; this haven of peace and tranquility, set up in the middle of a sumptuous landscape, appeared salutary for him and his family members.

De Gaulle’s family resided in this house exclusively during holidays and some week-ends. At a later stage during his career, difficult situations such as workers strike in May 1968, his defeat at the referendum in 1969, on his regionalisation project and senate reform, pushed him to resign. After this turn of event, he settled permanently in Colombey Les Deux Eglises where he continued to write his war memoirs until his last breath (9th November 1970)

Today, his residence became a museum open to the public. The property, adored by Charles de Gaulle for its harmony, serenity and a resting ground for his family, was then transferred to his son, Admiral Philippe de Gaulle. The tour guides will, indeed, help us further discover the different steps of the life of this great, yet discrete statesman.

Not far away from the historical house is located the Charles de Gaulle’s memorial. This huge building is home to an impressive fleet of cars he used, notably the famous Citroën DS…!

From his childhood to the World War I, his role as a father and writer, by way of his many functions to his withdrawal in 1969, Charles de Gaulle’s life will have no longer be a mystery for us once we travel in this region.

We also will be able to admire the Lorraine cross, which he is so much fond of ; a 40 meter high edifice, symbolising liberty in France, inaugurated on the 18th June 1972, 32 years after the resistance call of the 18th June 1940. This gigantic monument overlooks the village and the cemetery where the Charles de Gaulle’s grave is located.

Be it alone, or with your family, school group, work council or association, book a historical and cultural tour guide ; it is a real projection in the past ! The guided tour programme is defined as follows : 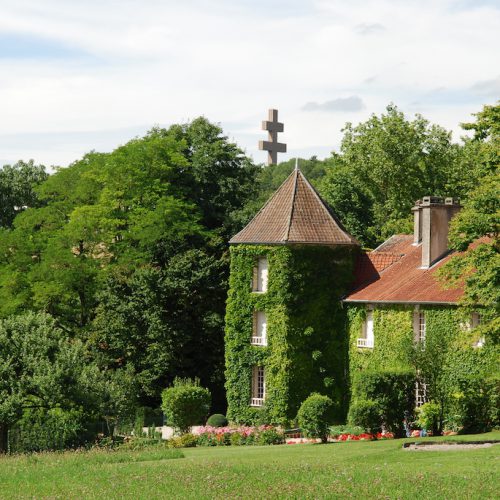 Early departure by car with a break for breakfast on the way.

Upon arrival in the morning, you will start by the visit of the domain of La Boisserie, place where de Gaulle’s family liked to withdraw a long way from business and Paris. It is also the place where the general de Gaulle organised the first meeting with the Chancellor Adenauer on the14th September 1958. These two men had a perfect understanding of one another, thereby resulting to the signature of the treaty of the Élysée Palace,in 1963.

Lunch in Colombey, in one of the restaurants defined by local gastronomy and quality cooking.

The day will continue with the visit of Charles de Gaulle’s memorial in a 3-step process.

End of the program around 4:30 pm, the tour can either continue with a night in Troyes or return towards your starting point (upon your choice)