THE PUY DU FOU & THE BLACK FRAME OF SAUMUR

Le Puy-du-Fou in Epesses (85) located in the centre of a forest, between Cholet and La Roche-sur-Yon received the title of best park in the world in 2012. And for good reason, this place does not resemble any other leisure parks. Time travel and the stories of France, and more particularly that of the Vendée await you!

This site gives way to a Renaissance castle built in the 15th and 16th centuries. In 1794, General Louis-Marie Turreau affirmed his desire to plunder and destroy villages and hamlets. On January 26 of the same year, the infernal columns or incendiary columns arrived in Epesses. The castle would not escape the devastating flames. The walls and the left wing were spared.

After having been the property of different families, Maître Louis Savard Notaire acquired the burg and the land in 1947 and restored the premises. The building was classified as a historical monument in 1962. His heir son sold it to the General Council of Vendée in 1977. Philippe de Villiers, then sub-prefect of Vendée, discovered the castle, fell under its spell and wrote his show “La Cinéscénie” which was very successful.

Each year more than 2 million people flock to browse the Park, attend various performances such as the Cinesceny, the Wedding of Fire or the Imaginary World of La Fontaine.

Immerse in the heart of an incredible story staged at the typical Café de la Madelon and do not miss the magnificent shows accompanied by special effects, waterfalls, giant machinery and adventures; a real treat for young and old alike.

Then head to Saumur, the Mecca of French horse riding, for a special guided tour. The Black Frame promises civic and cultural enrichment.

This prestigious equestrian school, which was open to the public in 1968 and listed as a World Heritage Site by UNESCO in 2011, educates senior managers of the National Riding School.

After the Revolution, Louis XVIII created in 1815 the school of mounted troops dedicated to the formation of an elite corps for the training of horses. Did you know that the name Black Frame refers to the color of the squires’ outfits?

You will discover the history and the universe of this famous institute, the stables, the large arena, the saddlery, etc. The school’s mission is to transmit this exceptional heritage and to maintain the French tradition of horse riding built over the centuries.

Apart from the reputation of the Black Frame, the city of Saumur invites you to discover its pretty pedestrian streets, magnificent residences and troglodyte dwellings.

On foot or by small electric train, this place will amaze you. Among the many monuments, the castle of Saumur, classified as a Historic Monument, remains the unmissable and emblematic building of the city.

This fortress resembling a fairy-tale castle, erected in the tenth heaven by Thibaud le Tricheur, Count of Blois, offers an absolutely remarkable view.

Alternately the residence of the governors of Saumur, prison, arms and ammunition depot, the city acquired the building in 1906 and today houses the municipal museum, labeled Musée de France.

A stone’s throw away, the city of Angers, capital of Anjou, is full of treasures and historic places. On request, you can visit, accompanied by a guide, the 13th-century royal fortress and the Terra Botanica theme park, revealing the secrets of six centuries of plant history.

Inside the fortress, you can admire the Apocalypse tapestry, commissioned by Louis 1st of Anjou in 1375. This unique work, woven in wool and composed of 6 pieces, describes an illustration between the property and the mall of the last book of the bible.

With its 100 m by 4.50 meters height, it remains the largest perfectly preserved medieval tapestry.

Book this stay combining discovery of our regional heritage and industrial know-how that we have concocted for you. A beautiful, unforgettable cruise that you can share with family, group or friends, during a professional outing or seminar. 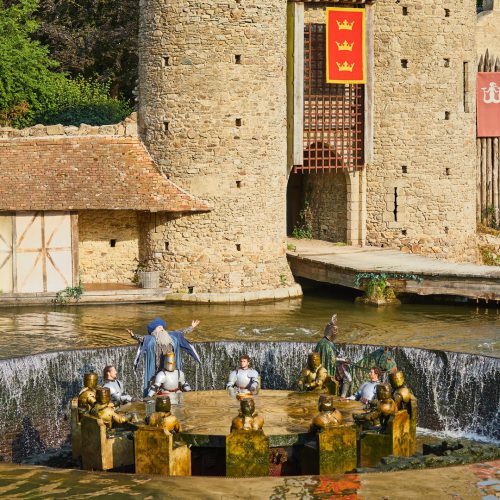 Guided tour of the fortress of Angers, its unique Apocalypse tapestry

Tour of Saumur in a tourist train

Guided tour of Saumur castle, an imposing edifice in the city

7:30 am: Departure by grand tour coach in the direction of Puy du Fou, approximately 450 km away from the starting point.

10 am: a coffee and croissant break will be offered to you on the way.

1 pm : you will be expected at the Puy du Fou for lunch at the Mijoterie du Roi Henri (or another restaurant in the park).

4 pm : Installation at the Camp du Drap d´Or hotel (or another hotel in the park depending on availability or desiderata). The theme of this establishment is the splendours of the Renaissance. You will discover a lodge with a royal atmosphere during the time of Kings Francis I and Henry VIII of England.

Dinner at the Café de la Madelon restaurant. The story takes place in 1914, and you are invited to the Madelon wedding dinner, everything is ready for the wedding but … nothing will go as planned!

The evening will continue with the show: “Les Orgues de Feu” or, depending on the programme, the famous Cinéscénie on 23 hectares of stage, 2550 actors and lasting for one hour and a half.

All the rooms, with an area of ​​27m², have free Wi-Fi, a TV with access to the Puy du Fou channel, French channels and international channels.

Breakfast at the hotel

Free day at Puy du Fou, the group will meet for lunch and dinner. Lunch at the restaurant of the Echansonnerie in the Renaissance atmosphere. Afternoon in the park, many activities are available. Scattered around the park, park experts are on hand to help you navigate.

Dinner at the Bistrot restaurant

Evening show according to the Puy du Fou agenda. Every evening, the fiery wedding feast. New for 2021: the imaginary world of La Fontaine

In the morning drive to Saumur and its famous black frame.

Breakfast at the hotel

8 am :  Departure from Puy du Fou to Saumur

10:30 am : A classic guided tour of the black frame (duration 1 hour) awaits you, where you get to visit the stables – the large arena – the traditional saddlery.

12:30 pm: Lunch in a troglodyte restaurant located a few minutes from the black frame.

2:30 pm : Relaxation and walk in the heart of the pleasant city center of Saumur, its castle set up on its pedestal overlooking the city and its surroundings.