The Alabaster coast in Seine-Maritime (76), renowned for its cliffs and endowed with a varied heritage, offers exceptional places to visit during a getaway near Paris.

Veules Les Roses: a corner of romance between land and sea

The guided tour of the Municipality of Veules Les Roses, located in the Seine-Maritime department in the Normandy region, will truly seduce you.

This seaside resort, located between sea and mountains, overlooking the cliffs of the Alabaster coast, has been one of the most beautiful villages in France since September 30, 2017.

In the 19th century, the city became the resort for a host of artists: Victor Hugo, Paul Meurisse, actress Anaïs Aubert, Russian painters… On September 24, 1882, a historic and significant day for the city took place: the banquet organized by Victor Hugo was offered to the 100 most disadvantaged children!

On June 12, 1940, Veules Les Roses suffered serious damage. The invasions, looting, fires and destruction would destroy the city. The seafront was almost devastated.

The Municipality, assisted by owners and tenants, has worked for several years (2001 to 2014) to preserve and enhance the regional heritage of this city with the smallest river in France.

Today, it is a quiet village with motley architecture that you will have the pleasure of discovering. In an authentic atmosphere, you can admire the period half-timbered buildings, mills, fishermen’s houses built in sandstone, flint or bricks, old bathroom cabins …

Veules Les Roses is also famous for its cultivation of watercress. This plant grows at the very source of the river. You won’t resist the urge to bring home a boot! This natural site has a mill built in 1832 by François Vattement that will amaze you.

Built-in the 7th century around a monastery, the seaside resort of Saint-Valéry-en-Caux, bordered by the Channel between Fécamp and Dieppe, classified flowery town 4*, has many tourist attractions.

Saint-Valéry-en-Caux was not spared during the Second World War. Besieged by the Germans the city center is largely destroyed. The reconstruction works were undertaken and new constructions took place.

The village, divided into two parts separated by the marina, offers visitors a friendly and soothing environment. The half-timbered houses with flowered planters, the fishing port and the pretty alleys reveal a rich historical and architectural heritage.

The Maison Henri IV or Maison Ladiré, a half-timbered historic monument, has a beautiful Italian Renaissance-inspired facade! The penitents’ cloister and the 15th-century church of Saint-Valéry are not lacking in finesse

A large beach offering exotic and impressive panoramas awaits you for a walk in complete relaxation while breathing the fresh sea air.

This day with family, friends or in a group allows you to share a memorable moment and contemplate the indisputable charms of this fabulous region. 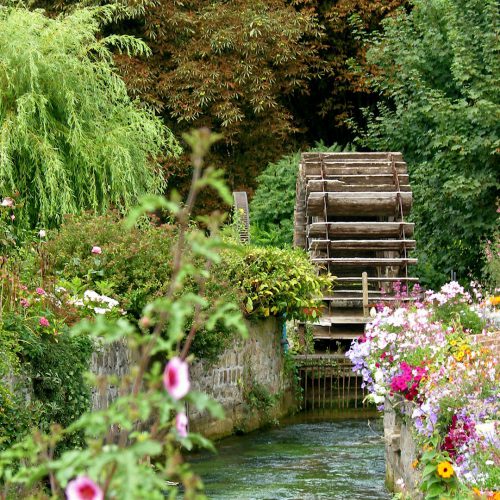 Departure by coach and pick up of participants

Breakfast break on the way, you will be served a hot drink + a pastry

Veules les Roses is located on the Alabaster coast on the Cauchois coast. The small town is bathed by the smallest river in France called La Veule. Accompanied by a guide, you will set off to meet this small town known for the wealth of its artists and writers from all eras (Victor Hugo, Anaïs Aubert, Michel Bussi, etc.). You will appreciate the architectural diversity (Norman thatched cottages, seaside villas, water mills…) of this village classified since October 2017 “Most beautiful village in France”, the 1st in Seine-Maritime!

To facilitate the organization of the day, a local guide will accompany you during the day.

She will provide you with specific information on the Alabaster Coast and the region.

Lunch by the sea – with a free aperitif

(Around) Relaxing promenade by the sea. You will take advantage of the afternoon to stroll on the beach of Saint Valéry en Caux or in the seaside resort.