Visit the main places and champagne house in Reims

Visit the dragon cavern, the ladies path, the Vauquois small hill, the Verdun museum and the Douaumont ossuary

World War I, from 1914 to 1918, has left deep imprints in our minds and the landscapes of several french territories.

Memorial sites are plentiful in France. Going back to memory lane allows us to maintain, pass down the history to the new generations and pay tribute to the missing persons who served our country. A real transportation in the past, with profound emotions and historical education, is awaiting visitors in Oulches-La-Vallée-Foulon in the department of Aisne (Picardie)

Before the conflict, the Craonne village was situated on the higher lands, at the south-eastern end of the Ladies path plateau. The pretty name of this path is given in the Adélaïde and Victoire’s honour who are Louis XV’s daughters. The village has suffered from terrible disasters during wartime.

The Germans occupied the path tops and took possession of the Creute cavern, near the Hurtebise Isthmus. This cave offers a refuge and underground barrack. Owing to its strategic geographic situation, the French and the Germans fought for this cave, from September 1914 to November 1918.

The cave took the appearance of a furnished den during this time. The Germans used the site to establish resting places, kitchens, water places, aid stations, operating theaters, command posts and ammunition stocks. This tunnel, called by the Germans “Dragon cavern” (Drachenhöle), is reminiscent of the flamethrowers used during battles, as dragons which breathe fire.

On the 16th of April 1917, General Nivelle’s assault was a real failure and rapidly caused the loss of 30 000 WWI French soldiers. Thereafter, French soldiers conquered the Dragon cavern part back. In May, General Pétain replaced Nivelle. After various battles, Germans retreated on the Ailette between Laon and Soissons.

A chronological and explanatory frieze of 17 meters was provided in the gallery. It shows the complicated reconstruction of the villages and churches which were destroyed during the Great War attacks. With vestiges that are still present on the site and the numerous animations provided, you will better understand how the fighters lived underground.

The village of Vauquois, the center of World War I, would know the same fate.

The guided visit of the French and Germans’ underground installations of the Vauquois small hill and the Verdun memorial allow us to understand the violent struggle that occurred in this village. The pictures and the audiovisual devices give you a snapshot of the life of fighters occupying the rugged areas.

During this battle between Germans and French in 1916, many soldiers lost their lives and the village was wrecked by landmines and mortar bombs. Americans reconquered the region on the 26th of September 1918 and discovered a catastrophic landscape. Even if today, nature reasserted itself, the craters show you the extent of the confrontation.

After going through this emotional journey, finishing this getaway on a sparkling touch is necessary! A guided visit to one of the biggest champagne houses in the world, Vranken-Pommery, situated in Reims, will make you discover this charming vineyard with its ancestral savoir-faire.

At the death of her husband, Jeanne-Alexandrine Pommery came back to the Pommery & Greno society. She was dedicated to her work to create the most beautiful vineyard of Champagne. In 1874, the first brut champagne was born: the Pommery Plain. Fine and pure, it was on its way to make enormous commercial success.

From 1860 to 1910, Mrs Pommery never stopped to buy lands and extend the estate. She built property of 65 hectares! The Pommery’s lineage and their partners maintained and perpetuated the tradition of this house, bought in 2002 by the Vranken Monopole.

Visiting the war 1914-1918 memorial sites, discovering different stages of the work, caves, works of arts, frescos and galleries will promise you exclusive moments around fascinating stories.

The guided tour programme is defined as follows :

Site of the ladies path and dragon cavern :
www.chemindesdames.fr 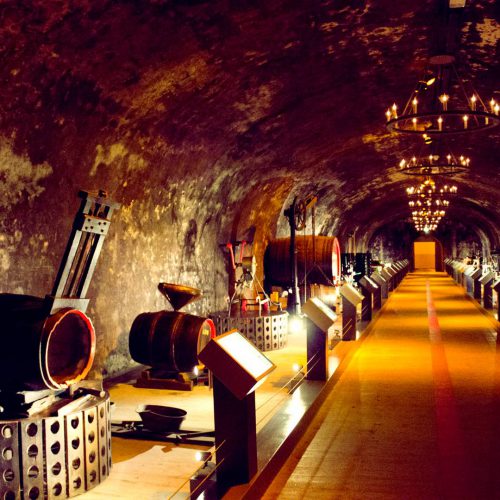 Price per person from 399€ transport, meals, accommodation and visits

Around 10 am: Departure for the guided tour on the Chemin des Dames. This tour on a coach is going to last 2 hours and cover almost 35 kilometers. The visitors will cross sites marked by the Great War: California plateau, the old Craonne/Arboretum village, the cemetery of the Craonelle village, the Basques monument.

Have a guided tour of the Aspasie champagne familial vineyard, a convivial structure, smaller, yet more authentic than the big brands. The owners will introduce you to their cultivation, their daily life and their passion for their work. The Aspasie cellars have existed since 1794. You will be able to find so many answers to your questions during the tour, which will end around an exquisite champagne tasting session.

10 am: Organized by the Vauquois small hill association, you will start the guided visit from the outside, then, you will access the small hill galleries, the Germans and French underground installations, as well as the museum.

The Vauquois battle counted around 14000 dead soldiers and 519 explosions on the Germans’ and French’s side. Considering the significance of the charges, the landmines are more and more buried. We count 17 kilometers of galleries for the Germans against 5 kilometers dug for the French.

Around 2: 30 pm: the group is going to the Verdun battlefields. A path duration is almost 3 hours, it will be done by coach and will present you :

A guided tour of the Right bank battlefields, the Douaumont fort, followed by the Douaumont ossuary visit, with a movie called “mud men” also lined up.

At the end of the afternoon, we are going to take the road towards Reims and stay there for the evening and night.

Lined up during the program on the 3rd day, you will visit the must-see cathedral and palace duo of Tau: On the footsteps of the Kings of France.

The most remarkable pieces of the royal treasure are the Charlemagne’s talisman (9th century), the Saint-Remi’s chalice (12th century), and the reliquary of the saint light bulb, which would contain the celestial oil, which was used to anoint new kings during coronation ceremonies.

The cathedral Notre Dame of reims

All visitors of Reims must pass by the Notre Dame cathedral. And for a good reason, it is an architectural jewel with a unanimous beauty. Bigger than the Notre Dame cathedral of Paris, the amateurs will not only like the 2,303 statues decorating its facades but also the biblical sceneries, the king’s gallery, the bestiary and the gargoyles. Inside the cathedral, there is another beauty waiting for you –  stained-glass windows. The massive rose and contemporary stained-glass windows, designed and crafted by Marc Chagall and Imi Knoebel, allow light to pour into the cathedral magically.

Lunch at the heart of Reims and strolling in town :

1 pm: Lunch at the heart of Reims

4 pm: End of the service and return trip to home destination