DISCOVERY OF THE NATIONAL LIBRARY OF FRANCE & THE BERCY DISTRICT

Visit on foot or by coach

Paris, the capital of France, the most visited in the world, is teeming with magnificent monuments with incredible architecture, bohemian or luxurious districts… which seduce millions of tourists every year.

You too can take advantage of an organised Parisian getaway to discover emblematic places of the City of Light.

Located in the 13th arrondissement, quai de Tolbiac, the National Library of France, built according to the plans of the architect Dominique Perrault, inaugurated in 1995 by François Miterrand is the largest and most important in the world!

After the transfer of a large part of the collections from the rue Richelieu site, the library opened its doors to the public at the end of 1996. The four angular glass towers representing open books impose their grandeur on the landscape.

This vast space, which has known a rich and turbulent history, contains a panoply of royal collections gathered from the end of the Middle Ages as well as 15 million books, ancestral manuscripts, photographs, coins, medals… or even works from 1537.

It all began in 1368, when Charles V decided to set up his books in a room in the Louvre. Thereafter, the kings of France would keep this tradition.

By a decree of December 28, 1537, François 1st forced printers and booksellers to store books, printed and sold in the kingdom. Under the reign of Louis XIV, the library, which developed considerably, opened its doors to the public in 1720.

In the 17th century, this site included several buildings: the Palais Mazarin, the Hôtel Tubeuf, the Galerie Mansart, etc. The new library would be installed in the 18th century.

From room to room, your guide will introduce you to the origins, architecture, mission and organization of the library and then lead you to the famous globes of four meters in diameter.

This enriching cultural visit in the bowels of this unique place which will delight adults and children alike.

From the esplanade of La BNF, a breathtaking view of the Seine awaits your eyes. You can admire the Ministry of the Economy and Finance and Bercy Park on the right bank. The Simone de Beauvoir bridge for pedestrians allows you to cross the river to reach Bercy Park.

The guided tour of Bercy Village, also called the Cour Saint-Émilion, located in the 12th arrondissement, will enchant you. This once residential district, owned by Baron Viollet-le-Duc, has one of the most beautiful parks in Paris.

Established on old wine halls, this picturesque place, where the largest wine market in the world was held, exudes a special atmosphere, exotic and different from other districts of Paris.

You will discover the restored 19th century cellars, classified in the supplementary inventory of historical monuments! A central paved alley separates these old cellars. The old rails where the circulating trains filled with barrels are still visible.

This marketplace alone supplied all the cafes in the capital! Alcohol enthusiasts flocked to buy the untaxed wines and liquors at the time until 1860.

Bercy had dark years because of fires and floods, in particular that of 1910 which submerged the warehouses. In 1960, the latter were deserted due to the production of good wines bottled at the château. The rivalry is such that the neighborhood is gradually dying out.

43 hectares within the city walls are abandoned. Town planners and architects recover the places. It was not until 1970 that Paris began building a new district and the Palais Omnisport was born. The Ministry of the Economy, Finance and Recovery moved to Bercy in 1988.

Bercy, which has known the incessant ballet of many handlers, traders, customers, merchants and seen the Seine filled with boats for deliveries, has now become a peaceful district.

Come and discover Bercy and its remains! A real journey through time and culture to share with friends, family, alone or with your partner awaits you. 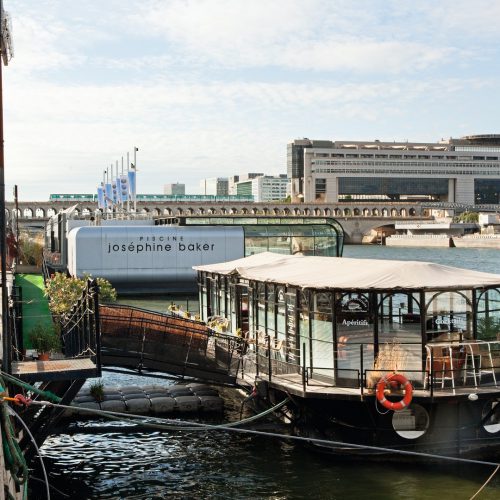 Departure by coach to Paris on the left bank where the National Library of France is located. The BNF, located on the Quai de Tolbiac, overlooks the Seine and stands out on a wooden esplanade planted with 4 towers which symbolise open books.

Home to the BNF, which was inaugurated in 1995, the establishment houses one of the most important collections of documents, archives and books in the world.

You will also be able to admire the gigantic globes known as of Louis XIV which are representations of the earth and the sky offered by Vincenzo Coronelli cosmographer.

After the visit, you can enjoy the panorama from the BNF esplanade, the view of the Seine, the Ministry of the Economy and Finance, the Bercy park which is located on the right bank. In order to get there, you will take the elegant Simone de Beauvoir footbridge, 190 meters long, reserved for pedestrians.

For people who do not want to walk too much, the coach can drop them off at the restaurant.

Lunch towards the Village of Bercy and continuation of the guided tour of the old wine markets of Paris, the Cour Saint Emilion, the Bercy park, the multi-sports park and the immense concrete bar which houses the Ministry of the Economy, finance and stimulus

End of our services and departure of the coach or free time during Saint Emilion in the heart of the village.