A TRACK GAME IN AN ICONIC NEIGHBOURHOOD

Accompanied by your guide, you will go to the old stock exchange located in the 1st arrondissement of Paris, more precisely where the center of commercial life has abounded for centuries: the “Ventre de Paris”.

Originally, the building was placed between the Saint-Eustache church, the Louvre, and the Beaubourg plateau dates from the Middle Ages.

In 1572, Catherine de Médicis (1519 -1589) acquired the buildings and the Hôtel d’Albret and had a prestigious hotel built, according to the plans of Jean Bullant, Architect, as well as an astronomical column 31 meters high for her astrologer. Como Ruggieri.

After the death of the queen, Charles de Bourbon, Comte de Soissons bought the Hotel, which would later remain in the same family. In 1720, Victor Amédée de Savoie, Prince of Carignan, owner of the premises, established the Paris Stock Exchange.

Ruined by Law’s bankruptcy, he was forced to part with the property. The city of Paris destroyed the buildings in 1748. Only the Medici Column sold separately to Louis Petit de Bachaumont is still visible today.

In 1763, the city of Paris decided to build the Halle au Blé dedicated to the storage and trade of cereals. The work was entrusted to the architect Nicolas Camus de Mézières. His plans call for a circular building with a central open-air courtyard and a dome.

The establishment closed its doors in 1873. La Halle became the Bourse de Commerce from 1889 until 2016. François Pinault, a businessman in the luxury industry, restored the building to its initial appearance (1889) and made it into a museum to exhibit part of its contemporary art collections.

It is in this emblematic place that the first 12th-century market wanted by Louis VI in the Halles district was born. Then in 1183, Philippe Auguste added wooden halls. In 1853, Victor Baltard built new pavilions mixing glass and cast iron, the famous “Pavillon Baltard”.

The building was demolished in the 1970s, the Forum des Halles replaced the pavilions. In 2010, the City of Paris deemed it useful, for security reasons, to renovate the site, especially the highest part. The project presented by Jacques Mangin, Architect, consisting of designing a canopy bordered by a garden was approved.

Nearby, the Saint-Eustache Church, built in the 16th century in place of the old 13th-century chapel, restored in 1840, offers an exceptional view. This building stands out for its different architectural styles: Flamboyant Gothic, Renaissance, and Classical.

You will be impressed by its silhouette, its dimensions, its imposing flying buttresses, its heart-shaped stained glass windows, and its nave.

You will then head to the Royal Palace for a change of era. Get ready to live an unusual experience! You are in Paris in 1841 in the midst of a criminal case.

Accompanied by a professional actor, you will lead the investigation into the murder of the murdered Duchess Blanche de Condrie at the foot of the stairs leading to the agency of the famous private detective Vidocq. Through a treasure hunt, you must find the culprit of this drama!

This investigative visit allows you to discover all the secrets and cultural riches of the Vivienne Palais Royal district in a different way.

The estate was built in 1628 by Cardinal Richelieu, then the magnificent Galerie Vivienne, with its colorful mosaics and superb glass roof, was added in 1823.

Its flamboyant appearance and the various boutiques make it one of the most emblematic of Paris. While continuing your investigation, you can admire the sumptuous gardens with their beautiful alleys of lime trees, the arcades of the Royal Palace and the Place des Victoires.

Each year, the gallery sees many visitors passing by, appreciating the calm that reigns in this enchanting setting.

With family, friends, in a group, or for your professional events, take advantage of this historic Parisian getaway embellished with a treasure hunt for the least surprising. 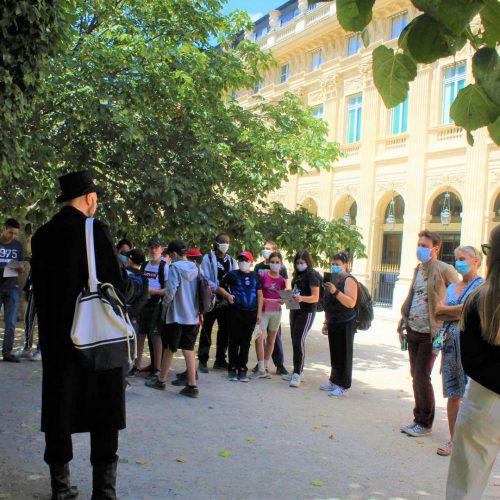 Not included in this programme and on request :

Lunch in a neighbourhood restaurant

After lunch, it is time for a discovery and fun afternoon. You will head to the Royal Palace and its gardens on foot where you will be greeted by a professional actor who will accompany you during the visit and the investigation. Beside being a treasure hunt, it is also a fun way to discover an emblematic Parisian district around the royal palace.

End of our services