Treat yourself with an unprecedented break in the fascinating temple of Freemasonry located in the 9th arrondissement of Paris, at the headquarters of the Grand Orient! This organisation welcomes you for an exclusive guided tour.

You will discover the functions of this mysterious heritage, the values, the great periods, the esoteric traditions and the influence brought on the society and the citizens. Whether you are initiated or not, the centuries-old history of the Freemasons will fascinate you and help you understand their philosophy of life.

The origins of Freemasonry, coming from Great Britain, go back to the 18th century. At that time, masons, workers, stonemasons, contractors and various trades gathered in lodges (meeting link).

In 1717, in London, four lodges joined together to create the Grand Lodge of London and Westminster. Several of them will be formed in Great Britain under the Masonic obedience of the Grand Lodges of Scotland. The first French lodges in Paris appeared during the years 1725-1737.

The museum, established in 1889, was stripped of its property during the German Occupation of World War II. Following the trauma caused by this event, an imposing construction with metal protection replaced the small building.

This place of history and culture reopened its doors in 1973, gradually rebuilding the looted heritage and enriched with new pieces. Named the Museum of Freemasonry in 2000, it was awarded by the Ministry the title of “Museum of France” in 2003.

The building contains an impressive collection of 18th century earthenware, seals, jewelry, medals, paintings, engravings, photographs… You will be able to admire the objects presented chronologically to allow you to fully understand the evolution of Freemasons over the years and centuries.

Among the symbolic pieces treasured by the Museum, you will discover a full-length portrait of the Grand Master, the Count of Clermont from 1723 to 1771, the aprons of Jérôme Bonaparte and Voltaire or even the sword of “Venerable” by Lafayette

The original edition of Anderson’s 1723 Constitutions and unique manuscripts are among the rarities you will be privileged to behold. A real fascinating historical journey awaits you!

By coach, you will reach the Tuileries Gardens, the oldest and largest in Paris, located along the Seine, between the Louvre Museum, once the palace of the kings of France and Place de la Concorde.

This unusual visit takes you on an incredible investigation. Take up the challenges! Riddles, magic and myths; this historic landmark arouses the curiosity of many visitors every year.

Thanks to captivating treasure hunts led by a professional actor, young and old will have the opportunity to discover the history of this magnificent park in a fun way.

Did you know that a legend has it that a ghost, the red man, with obscure appearances, haunted the residence? Indeed, a butcher, who worked near the Palace, a little too curious discovers the secrets of Catherine de Medici. The Queen orders his execution and the latter would have promised to return for revenge!

Its name comes from the old tile factory where the construction of the Tuileries Palace would take its place in the 16th century at the request of Catherine de Medici. Multiple rulers occupied this home before the destructive 19th century fire following attacks during the Paris Commune.

Some vestiges remain, it’s up to you to find them!

In 1664, André Le Nôtre, renowned gardener to Louis XIV, gave it its current appearance of a French-style garden, classified as a historic monument, and became a place for strolling where Parisians and tourists mingle.

Experience this original activity with family, group or friends in the heart of this romantic masterpiece and reserve this day punctuated by highlights and surprising encounters. 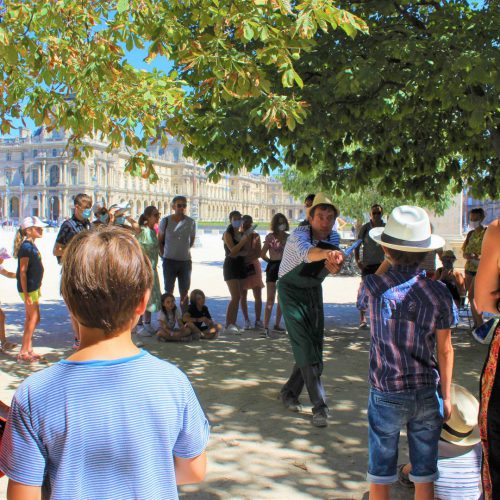 Not included in this programme and on request :

Visits to other neighbourhoods possible on request

You will be greeted by your guide upon your arrival at the Freemasonry Museum for a route that will lead you to discover history and culture, but especially its importance over the centuries in our society. You will be able to appreciate 10,000 pieces of the Masonic temples according to their availability for the visit.

Created in 1889, victim of spoliation during the Second World War, the museum reopened in 1973. Today, it is approved by the state, bearing the name Musée de France.

Lunch in a nearby restaurant

The coach will take you to the Tuileries Gardens. Following the discovery of a mysterious document, you will be invited to participate in an investigative visit in order to solve the riddle. An original way to discover this French garden classified as a historical monument. Located along the Seine between Place de la Concorde and an extension of the Louvre Museum. The Tuileries Palace was built in the 16th century at the request of Catherine de Medici. The palace was the royal and imperial residence of many rulers; voluntarily burnt in the 19th century during clashes at the Paris Commune, it is today

At the end of the visit, you can continue at your own pace with a walk to the Louvre pyramid before leaving this high place in Paris history around 5:00 p.m.