The 7th arrondissement of Paris, associated with the nobility and the aristocracy, is full of historical monuments, residential districts, sumptuous facades and buildings with meticulous details.

This district remains well known thanks to the presence of the Eiffel Tower, symbol of the capital and the most visited element of the city. The programme offers you the opportunity to discover many other treasures. Book this Parisian getaway that you can happily share with family, friends or in a group.

Located between the Invalides Esplanade and the Champ de Mars on the left bank, the 7th arrondissement allows you to admire the beautiful neighbourhoods, official or political institutions, embassies, and mansions. Prepare to be amazed!

Among the magnificent museums and galleries, the Orsay Museum, located in the heart of Paris, along the Seine, is one of the must-see places to visit. Valéry Giscard d´Estaing decided in 1977 that this magnificent building would replace the old railway station built in 1897 on the ruins of the Palace built under Napoleon in 1810.

Today it has become a unique and exceptional place that welcomes many visitors each year. One of the finest collections of illustrious impressionist works such as Van Gogh, Monet, Cézanne, Degas, Courbert, Garnier and Guimard is exhibited there.

If you are passionate about the arts and civilisations of Africa, Asia, Oceania and the Americas, you can opt for an in-depth tour of the museum!

Do not miss the Invalides Hôtel, built in the 17th century at the request of Louis XIV to accommodate wounded soldiers. Assigned to the Ministry of Defense, this emblematic monument continues its initial function as a hospital-hospice for wounded or mutilated combatants.

The buildings now contain 3 museums, the Museum of Relief Plans, the Order, the Liberation and 2 churches: the Dome Church with the tomb of Napoleon I and the Saint-Louis of the Invalides Church.

Close to this marvelous building hides a jewel of Baroque architecture, nestled in the heart of a green space of 7 hectares. The Palais Bourbon, or Rodin Museum, a former private mansion erected in 1727 by Jean Aubert Architect for Abraham Peyrenc de Moras, a wealthy financier, will amaze you!

Several owners will follow one another in this sumptuous residence, in particular Marshal Louis Antoine de Contaut Biron in 1753. Then many artists set up their workshops and the hotel will see illustrious characters such as Jean Cocteau, Henri Matisse and Auguste Rodin pass by. Abandoned, the state bought the old hotel at the start of the 20th century. Rodin wanted to donate his collections, but in exchange he demanded the creation of a museum dedicated to his works.

The famous sculptor will not have time to enjoy it or participate in the inauguration as he passed away in 1917 before the museum opened its doors.

The Palais Bourbon, seat of the National Assembly and the center of parliamentary life, forms with the Quai d’Orsay an island located between the rue de l’Université and the Seine.

Built in the 19th century, the Ministry of Foreign Affairs and International Development stands out from neighboring buildings designed for the nobility of the old regime. Its peculiarity comes from the fact that the garden and the courtyard are on the Seine side, while the hotels built in the 17th century in the Faubourg Saint-Germain are located along the river.

This former mansion, with its large main building framed by two side pavilions, its Doric and Corinthian pillars, its windows and its central rotunda form a harmonious whole.

There is still so much to discover, but this trip through the 7th arrondissement allows you to discover most of the architectural splendours and monuments of Paris that are part of the history of France. Lovers of old stones or not, you will love it! 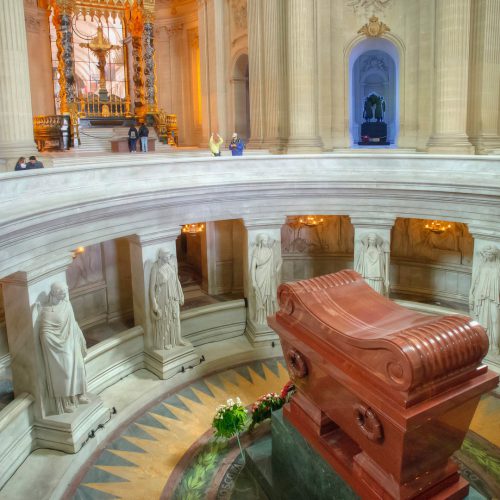 Alternatives to the proposed programme:

Meetup in front of the Orsay Museum and the Hotel de Salm, neoclassical in style. This building has housed the Legion of Honor museum since 1925.

You will be greeted by a certified Parisian guide who will lead the guided walk all day. We consider a guide for around 20 to 25 people.

Located on the banks of the Seine, the old station of Orsay on the proposal of President Giscard d´Estaing was transformed into a museum and inaugurated in 1986. Orsay brings together the finest collection of Impressionist works in the world.

From the starting point, you will be accompanied by your guide to the Palais Bourbon where our deputies and the Hôtel de Lassay sit. Then, towards the imposing Napoleon III-style Quai D’Orsay, where the Ministry of Europe and Foreign Affairs is located. You will continue to the Hôtel de Matignon which has the Prime Minister as a tenant, the Hôtel de Castries, the Hôtel de Biron where the Rodin museum and its gardens are located and the Hôtel de Monaco, residence of the Polish ambassador. The Swiss Embassy is located at the Hôtel de Besenval or the Hôtel Chanac de Pompadour. The list of sites to visit is indeed non-exhaustive and will depend on the wishes of the group.

(Around) Lunch in a restaurant nearby

The guided walk will continue with an exteriour visit to the Invalides National Hotel. This immense building, the construction of which was ordered by Louis XIV to house the disabled soldiers of the royal armies to support them as they retire. Today, the Invalides Hôtel has retained its original vocation. Its enclosure houses the Church of Saint Louis of the  Invalides, the Army Museum and a necropolis where, among others, the Emperor Napoleon I is buried.

End of our services.