Take advantage of this Parisian getaway with your state-certified guide. The “Ventre de Paris” as Émile Zola called it, is the 2nd administrative district located in Paris in the 1st arrondissement. Better known as the Halles district, this site refers to the ancestral central halls created in the 11th century at the request of King Louis VI. Located on ancient swamps and in the heart of the capital, this market has expanded rapidly. Philippe Auguste, then, decided to add wooden halls in 1183.

The population continued to grow over the centuries, the market began to become too small and unhealthy. Victor Baltard, renowned architect, was entrusted in 1853 with the construction of the new Baltard pavilions in glass and cast iron.

In 1960, traffic and hygiene problems led to the transfer of the market to Rungis, in the southern suburbs of Paris in Val-de-Marne. In 1979, the Forum des Halles took place.

In 2010, the site was completely renovated to give birth to La Canopée, bordered by a garden, a true architectural feat of glass, steel and plant inspiration.

Nearby, you can admire the Saint-Eustache Church, built in the 16th century, rehabilitated in 1840 to replace the old 13th century chapel. It is illustrated by its size, the richness of the works of art it contains and its different styles: Flamboyant Gothic, Renaissance and Classical.

This high place of music is renowned for the organ it has, one of the most beautiful organs in France, with 8,000 pipes, and for having hosted many celebrities such as Louis XIV, Molière, Richelieu, Madame de Pompadour…

Your guide will direct you to Beaubourg, the Georges Pompidou National Center of Art and Culture, built in 1972 in the Saint Merri district, in the 4th arrondissement of Paris.

Nestled between the Marais district, the Ile de la Cité and the Halles district, this modern and emblematic 42m high building houses a museum, a library, multiple exhibitions and festivals.

Did you know that this building was erected in place of a huge parking lot and a crate destruction shed from Les Halles?

This project, which Georges Pompidou, President of the Republic, wanted to materialise in 1969, in place of the plateau, had some setbacks. Public opinion rejects the idea of ​​this construction as a whole, which it considers to be completely incongruous and offbeat.

Finally, the construction of the building was entrusted to young architects Renzo Piano, Richard Rogers and Gianfranco Franchin. Valéry Giscard D’Estaing inaugurated it in 1977.

You will, then, set off to explore the Le Marais district located in the 3rd and 4th arrondissements. Originally, these were simple swamps and market gardens, occupied as early as the 12th century. Today it is part of one of the oldest and most visited districts in the capital.

Over the centuries, the neighborhood has taken on a whole new look, became more modern and the atmosphere changed completely. Residences replaced the fortifications and the bourgeoisie settled in the 17th century.

You will love its cobbled streets, its magnificent 17th century mansions, emblematic places, shops, art galleries … A true relaxation area that the inhabitants preciously preserve, the Marais remains a village where it is always pleasant to live and walk.

Some hotels are classified as historical monuments! That of Sully, Soubise, or even the 17th century Hôtel Salé, now the Picasso Museum, which has the particularity of housing Honoré de Balzac.

The Marais reveals many treasures that you can contemplate during your journey.

A little further on, you will discover the Place des Vosges, built during the Renaissance. This square, intended for the manufacture of precious fabrics and tapestries, was built at the request of Henry IV.

Work began in 1605 and ended in 1612. This new district quickly attracted the nobles who took possession of the apartments originally planned for the workers. This enthusiasm led to the closure of the factory in 1607.

Louis XIII and Anne of Austria celebrated their marriage there in 1615. In 1632, the statue of Louis XIII was installed in the center of the square. You will notice that the King’s Pavilion on the south side and the Queen’s Pavilion on the north side differ from other buildings whose height is uniform and harmonious.

The royal square lost its title and its statue during the French Revolution. His name was constantly changed until 1800! The current name

It comes from the Vosges department, the first department to pay the tax defined by the Revolution. The garden and its sumptuous buildings, steeped in history, nowadays represent Parisian elegance.

Book as a family, as a couple, in a group or among friends and enjoy this extraordinary route in the capital to understand part of its rich historical past. 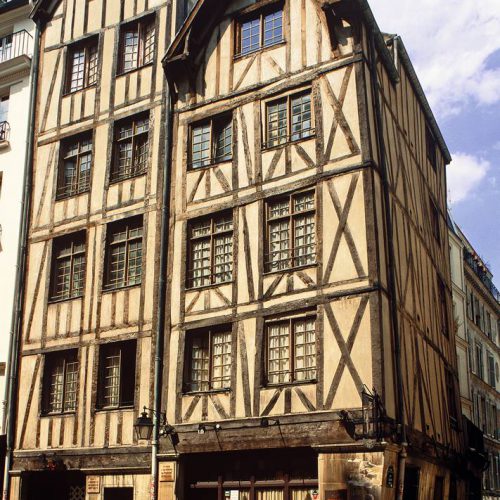 You will meet your guide in the Halles district in front of the imposing Gothic-style Saint Eustache church. “Due to its geographical location and its commercial activity since the 12th century, the market hall district was baptized by Emile Zola in one of his novels of the same name,” the belly of Paris “. The current building was built in the 16th century, the plans of which were inspired by Notre Dame de Paris cathedral. Richelieu, Molière or even Madame de Pompadour were baptized there, Louis XIV made his first communion there, Jean de La Fontaine as well as Colbert were buried there. Finally, not to be missed, the organ made up of 8,000 pipes is the largest in France.

More recently, work has been undertaken; the current layout of the district was inaugurated in 2016. You will continue the guided tour through this immense garden and the canopy, such as the heart of the halls now appears.

Then, you will arrive in the Saint Merri district, where the Georges Pompidou national art and culture center, more commonly known as Beaubourg, was built in 1972. It is a building that is emblematic for modern architecture as it has long been controversial.

Lunch in the neighborhood.

You will leave the Saint Merri district, crossing the rue du Renard to arrive in the renowned Marais district which was once a simple swamp. Today, it is one of the oldest districts in Paris, where modernity, fashion, party, bars, restaurants, mansions, museums and the history of Paris blend together. Under the leadership of André Malraux, the district has been preserved to the delight of visitors and Parisians.

You will end the visit at the famous Place des Vosges where you can enjoy some free time.