FROM THE MONCEAU DISTRICT TO THE CHAMPS ELYSÉE AVENUE

Book this incredible and beautiful guided tour from the Monceau district in the 17th arrondissement of Paris to the Champs Élysées in the 8th.

Your guide will meet you for a historic and unmissable day.

You will discover one of the most pleasant parks of Paris, where Parisians and tourists often gather. A surprising place filled with delicacy! As soon as you arrive, you will be in awe of the huge wrought iron gates adorned with gold.

Louis-Philippe d´Orléans, Duke of Chartres (1747-1793) acquired a large piece of land on the outskirts of the capital and, in 1769, decided to build a pavilion surrounded by a French garden.

To do this, the Duke called on the painter Louis Carrogis de Carmontelle and the architect Colignon to create a garden different from the others. Middle Ages, antiquity and exoticism will form an unusual decorative association. Carmontelle and Colignon will describe this elaboration as “La Folie de Chartres”.

Later, this green setting, transformed into an Anglo-Chinese style, expands to accommodate factories and events. In 1784, a wall called the Wall of the General Farmers surrounding Paris was built to prevent smuggling.

Several buildings then house the offices of the Ferme Générale. Of this set, only the Rotonde, the work of Claude-Nicolas Ledoux Architecte, can still be seen today at the entrance to the park.

During your walk, you will be able to contemplate many statues of artists, the old Town Hall of Paris, a Japanese lantern dating from the 18th century, and sumptuous trees over 170 years old.

Your guide will lead you to the Naumachie colonnades of Monceau Park erected with the columns that Madame de Medici had commissioned for the unfinished tomb of Henri II. These pillars harmoniously surround a large pool.

Some elements have since disappeared such as the gardens, the Dutch mill, the minaret, the Sycamore pavilion, while other vestiges such as the false Egyptian pyramid and the small Palladian bridge over the river still remain.

Did you know that the first parachute jump from a hot air balloon was made here by the aeronaut Garnerin in 1797?

At the end of the 19th century, the Pereire brothers and Baron Haussmann revisited the district. Magnificent mansions and luxury buildings rise from the ground to accommodate the bourgeoisie of the Second Empire. This district becomes the little Venice of Paris.

Several museums line the park: the Nissim Museum, formerly the Moïse de Camondo hotel, recalls the Petit Trianon, the Cernuschi Museum, neo-renaissance housing collections of Asian art, and the Jacquemart-André museum and its works of art.

Nearby, the Russian Cathedral of Saint Alexander in Nevsky reveals all its charm. This remarkable neo-Byzantine style building, erected at the end of the 19th century and classified as a historic monument, attracts many visitors every year.

This Orthodox place of worship celebrated the marriage of Pablo Picasso with the Russian dancer Olga Khokhlova in 1918, in the presence of witnesses Jean Cocteau, Max Jacob and Guillaume Apollinaire!

Appreciate its architecture, its domes, the large central fresco and the five pyramids adorned with golden bulbs that adorn this building.

Your visit will continue with a tour of the famous Champs Élysées, located between Place de la Concorde and the Arc de Triomphe, an emblematic monument commissioned by Napoleon in the 19th century. If you feel like it, you can climb to the top on request for a breathtaking view of Paris.

Former uninhabited marshland, this artery has today become the most beautiful avenue in the world and one of the most explored sites in the capital!

In 1670, Louis XIV entrusted Le Nôtre, architect and gardener, with the layout of this space. It creates a large tree-lined driveway. This avenue will have many names: Le Grand Cours, Grande Allée du Roule, avenue de la Grille Royale or avenue du Palais des Tuileries, to finally adopt the current name in 1694 and final in 1709

It was only in the course of 1791, during the French Revolution, that this axis as it appears today gained momentum and importance. Restaurants, cafes and luxury boutiques replace the guinguettes, which arouses the envy of famous figures. During the Second Empire, buildings and mansions were established.

You will not be able to remain unmoved in front of the Grand Palace, built in 1900 and listed as a Historic Monument since 2000, for the Universal Exhibition. Its architecture combining stone, steel and glass is a true masterpiece. The facade, the dome, the ironwork, the statues… form a sumptuous whole. Opposite this jewel, the Petit Palais, a prestigious building, houses the Museum of Fine Arts of Paris.

Book now this organised tour that we have carefully prepared for you. An extraordinary moment to share with family, friends or in a group! 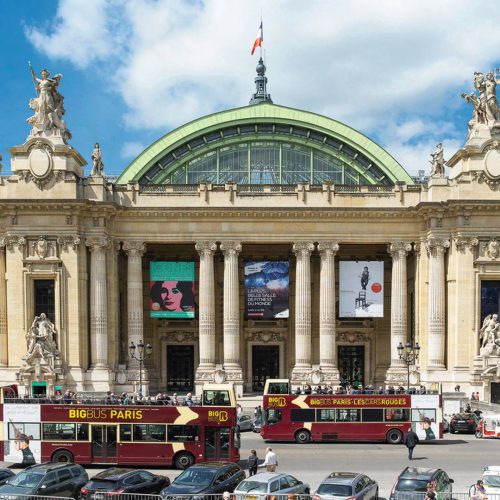 Meet in front of Monceau metro station in front of the two majestic gates and the rotunda with 16 columns where your guide will welcome you to lead the visit from the park to the Avenue des Champs Elysées.

Historically, on an area of ​​20 hectares, the Duke of Chartres commands a madness, known as the folie de Chartres. He is arranging a garden of illusions with a themed course intended to delight his guests and in order to compete with, among others, the gardens of Bagatelle and Versailles.

In 1787, the gardens were amputated, the rotunda was kept for purposes of granting a barrier, a kind of toll allowing to collect the tax on the goods which entered Paris (the wall of the general farmers). It became the rotunda of the park, the current area of ​​which is 8 hectares.

In addition to many remarkable trees, during the guided walk, you will discover some historical remains of the park.

At the start of the 19th century, during the Second Empire, under the leadership of the Pereire brothers and Baron Haussmann, the district was transformed with the construction of luxury mansions, some of which surround the park, such as the Hôtel Moïse de Camondo.

Lunch in the neighbourhood.

The visit will continue with a stop at the Russian Orthodox Cathedral of Saint Alexander Nevsky in Neobyzantine style built at the end of the 19th century. You will continue your visit by taking streets rich in anecdotes to finally arrive on the famous avenue des Champs Elysées which became the showcase of French luxury from the 1930s, including the Fouquet’s restaurant, now classified as a historic monument, and the famous cabaret Le Lido, inaugurated in 1946. The Place de la Concorde and the Arc de Triomphe are also situated in the avenue.

End of our services