Guided tour of Paris, the city of light!

The most beautiful illuminated monument in the capital

Guided tour of Paris, the must-see city of light!

Visit Paris, the capital of France has been nicknamed the City of Light for many years. Indeed, the city of Paris has obtained this nickname since the 17th century, because, at that time, King Louis XIV decided to light up the whole city with candle lanterns and torches to highlight the less illuminated corners, which were inclined to have ill reputations as well.

It was alongside Minister Jean-Baptiste Colbert that the king tried to fight the crime that annoyed the entire city and, therefore, secured the streets during the night such that the roaming thugs could no longer prey on passers-by.

To this date, the city of Paris is lit up by thousands of lights of all kinds and fully justifies its position and its name of the City of Light.

Discover a magnificent and memorable night tour of the city of Paris. Year-round, several monuments are enhanced by night lighting and various light effects, which give them a whole new look at night. The monuments are illuminated and embellished through the brightness of thousands of bulbs and the famous old Parisian lamp posts.

In this heritage-rich city, you will discover through these various historical monuments the charm of the capital, through the sparkling Eiffel Tower, or even through the magical glow of the Louvre pyramid.

During this nocturnal getaway, imagine walking up the avenue of the Champs Elysées, completely glowing, and discovering the incredible Arc de Triomphe at the end of the alley. This monument offers a breathtaking sight on the Champs Elysées roundabout.

Other monuments such as the Garnier Opera and the Sacré-Coeur basilica in Montmartre light up and transform the scene, thus creating a captivating atmosphere in the alleys of the capital. The panorama and the glowing buildings offer an experience that brings both a sense of mystery and fantasy to this getaway.

From Place Vendôme to Place de la Concorde, passing by Notre-Dame Cathedral, the most beautiful monuments of Paris will parade in front of you. These emblematic places have also been adorned with light effects like all the others, thereby transforming into magical places during the dark. Indeed, the cathedral’s gargoyles seem to come to life with the lights and shadows. All these illuminations give you another perspective on the architecture of Parisian monuments and allow you to see other facets of these buildings illuminated and sublimated each evening.

Paris is undeniably a magnificent city by day and by night. However, opting for a “Paris by night” circuit is a must during your visit to the region, and is also a quasi “must” for all globetrotters.

Its charm undoubtedly lies in its history, elegance and beauty. During this visit under the stars, your eyes will be totally dazzled by the radiance of the many monuments and the different light effects installed in the city for this purpose.

At nightfall, the City of Light shines with a thousand lights and makes children and adults alike dream.

Do not hesitate to book your tour with our agency, we invite you to discover the most beautiful illuminated monuments of the capital in absolute comfort. Experience this unforgettable moment with family and friends! 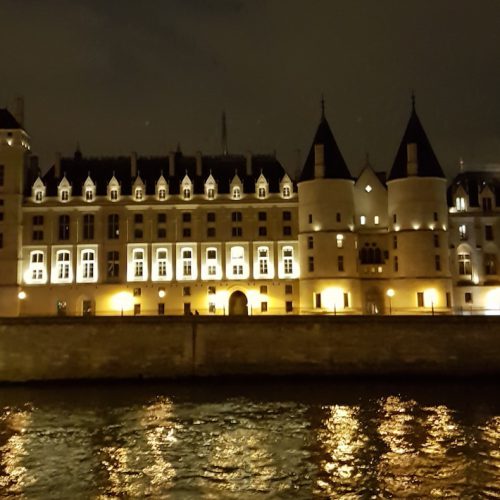 You decide the time of your tour, depending on the season and your program, the departure of the tour can be organized at any time as soon as dusk breaks.

A Paris illuminations tour in December can start from 5:00 p.m. Be it a clear or cloudy sky, Paris metamorphoses during each twilight. However, being a peak time, the time to travel the same distance can considerably modify your schedule. On the other hand, an after-dinner tour, around 10 p.m. or later, can offer an alternative experience. Indeed, the city calms down during the late-night, congestion decreases and the avenues become more serene.

We will advise you as per your convenience and we will adapt the best routes to your desired schedule.

Be it by coach, on foot, or by car, we offer below a flexible circuit to select from as per your (The tour can be commented by a chaperone or guided (professional guide).

The illuminations in December in Paris and on the Champs Elysées will be launched from the end of November till January.

Arriving in Paris by Porte de Bercy, the group can make a stopover at Bercy Village. Free time on request for a walk.

The Circuit will continue after the meal via the Viaduc des Arts, then the Bastille. You will enter the Saint Paul district and the Marais district, the rue Saint Antoine, the Hôtel de Ville, the Place du Châtelet where you can see from the right bank, part of the Île de la Cité, the concierge, the Paris Commercial Court and the Eiffel Tower from a distance.

The coach will continue on the rue de Rivoli towards the Royal Palace, the Council of State, the Louvre and approach the Tuileries garden, where the funfair and its big wheel predominate part of the park, and the Place de Concord.

We will head towards the famous rue Royale towards the Madeleine Church which sits at the end of the avenue, then towards the Opéra Palais Garnier, Galeries Lafayette and Printemps. The circuit will be adapted to the traffic in the city. We will then head towards Place Vendôme and Place de la Concorde. We will, then, go down Avenue des Champs Elysées, Arc de Triomphe and Place du Trocadéro, where we will stop for a photoshoot session in front of the Eiffel Tower, (ideally we will stop for an hour to contemplate the illuminated Grande Dame de Paris.

The bus will drop the group off in the northern part of Montmartre. From there, we can walk up through the vineyards of Montmartre, the Place du Tertre and the Sacré Coeur.

We can either walk down via the Butte Montmartre or take the funicular and meet the coach on the Pigalle side.

We give you the option to dine in Montmartre as per your budget or simply enjoy a mulled wine. Stops can be scheduled at any time according to your wishes.

We can also schedule a 45-minute cruise departing from Pont Neuf (the oldest bridge in Paris) or the Eiffel Tower Quai de Suffren.