Guided tour of the Sainte Chapelle and the Conciergerie

Two of the greatest historical monuments of France

Paris has an exceptional historical heritage which is the undisputed charm of this city. The Ile de la Cité, the first residence of the kings of France, containing 2 of the city’s most remarkable monuments, namely, the Sainte-Chapelle and the Conciergerie, and the Île Saint-Louis, located on the Seine, are among the essential spots to visit in the capital. These places, embedded in history, are real immersions into the enigmas of the past. The guided tour to the Sainte Chapelle, led by a specialist in the domain, is a true history course in open-air and will delight all visitors and those who are passionate about architecture and culture.

The Sainte-Chapelle, built from 1241 to 1248 on the Ile de la Cité, at the request of the King of France Louis IX (1214 – 1270), called Saint Louis, is an architectural gem. Placed in the heart of his residence, this building serves as a fortress for his relics.

The work took only 7 years. A record for such a site! The mystery remains even for the master builder. This feat of achieving a radiant Gothic style may be due to Pierre de Montreuil, a not so reputed architect.

Among them, the Crown of Thorns, worn by Christ on the day of his crucifixion, bought 135,000 pounds from his cousin, the Emperor Baudouin II of Constantinople: In 1804, the relics joined the treasures of Notre-Dame Cathedral.

The building consists of two chapels one above the other. The lower part with polychrome decoration is devoted to staff, officers and parish worship. The statue of the Virgin, patron saint of the sanctuary, stands at the entrance. With a low ceiling, this 6.60-meter chapel appears like a crypt due to its low light.

The vaults carpeted with fleur-de-lis, a symbol of the kings of France, and the statue of Saint-Louis at the end of the choir reveal the know-how of the period. The columns supporting the top of the building, also decorated with fleur-de-lis, all contain a medallion of a Saint. The mural above the door of the old sacristy evokes the Annunciation (13th century). Under your feet are the tombstones of canons!

The upper part (20 meters), reserved for the apartments of the royal family, captivates and enthrals. Gothic art is omnipresent in this exceptional place. Fifteen sumptuous glass roofs retrace 1,113 scenes from the history of mankind. The 15-meter-high stained-glass windows offer an incomparable spectacle when light penetrates through this 618 m² of glass walls.

The western rose window, which was commissioned by Charles VII and measuring 9 meters in diameter, dominates the portal, which itself dates back to the 15th century. This wonder with 89 panels relates to the Apocalypse of Saint John. Twelve statues of apostles, including Saint Peter, are displayed in the nave. The large shrine, in the choir, which housed the 22 relics, including the crown of thorns and a fragment of the cross of Christ will leave you impressed.

The fires of 1630 and 1777, a flood, the Revolution and impairment over time seriously damaged this historic monument. The chapel resisted destruction in 1836. Between 1840 and 1863, renovations were carried out to restore it to its original appearance. The destroyed spire was restored in 1855 by Jean-Baptiste Lassus, an architect.

Near the Sainte-Chapelle and opposite the Notre-Dame cathedral, another surprising story awaits you: that of the Conciergerie. This monument, built in the 10th century according to the wishes of Philippe IV Le Bel, once formed the Palais de la Cité, the seat of Capetian power.

At the end of the 14th century, the insurrection forced the sovereigns to abandon this building. The Conciergerie lost its initial function to become a prison in 1310. A revolutionary tribunal was installed. The imprisonments were at their peak during the Terror of the Revolution. Many people lost their lives in the massacre of September 1792.

Did you know that Marie-Antoinette stayed in this state prison in 1793 before her guillotine execution on Revolution Square? The emotion is still there when you arrive in front of the memorial chapel.

In 1914, the penitentiary closed and became a monument open to the public. You cannot help but be enthusiastic about the Gothic architecture of the hall of the armed men with the high vaults (8.50 meters), the guard room and the huge kitchens where 3,000 people ate.

Outside, the 4 fortified towers each have their specificity: the Clock Tower with the oldest clock in Paris, the Tour de César of Roman architecture, the Tour d’Argent, the shelter of the king’s treasures and the Bonbec Tower, torture room.

The guided tour of the Sainte-Chapelle and the Conciergerie, monuments classified as UNESCO heritage, will send you into the heart of the history of the Kings of France, marked by a rugged past. Be it alone, with friends, in a group, school or professional, come and experience an exceptional day! Children are invited to discover these places in a fun way. 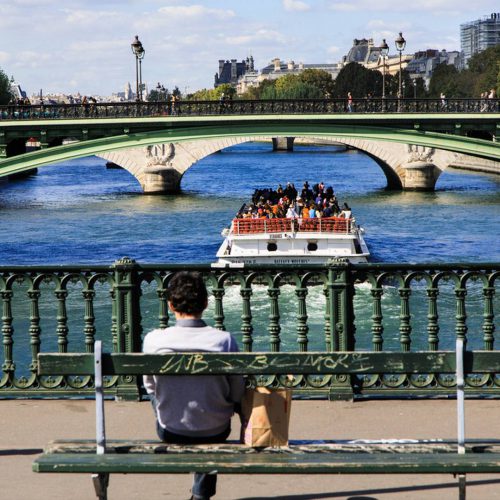 Situated in between the right and left bank of Paris and located in the heart of the city island, is the place where the kings of France resided from the10th century to the 14th century. The Sainte Chapelle is a medieval age masterpiece, built from Saint Louis’s request to welcome the saint relics of Christ’s passion. This beautiful building is particularly famous for its stained glasses windows.

A few steps from the Sainte Chapelle, the guided tour will continue with the Conciergerie, a state prison. It was the antechamber of death during the Terror of the Revolution. Marie Antoinette was imprisoned there. SuiteVoyage offers you a guided tour with a speaker who is a specialist in matters related to the Sainte Chapelle as well as the Conciergerie. For about half a day, you will discover one of the splendours of Paris and one of the most visited monuments in the capital. Then you will turn your attention to the Conciergerie, one of the oldest buildings in the city palace, followed by lunch in the neighbourhood. In the afternoon, we will continue, at your convenience, with a guided tour in the City Island or Saint Louis’s Island or even to the Notre Dame Cathedral. End of the visit around 5 p.m. Please do not hesitate to ask for a tailor-made program. We will be available to advise you.

Departure by coach to the Île de la Cité, the Sainte Chapelle and the Conciergerie are located