IN THE HEART OF THE LATIN QUARTER

The discovery promenade will be guided for everyone.

Paris, rich in a remarkable historical past, is home to magnificent neighbourhoods! Among the most famous discoveries is the history of ancient districts in the 5th and 6th arrondissements of the capital: the Latin Quarter, Saint-Germain-des-Prés and Saint-Michel.

The Latin Quarter, located on the left bank of the Seine owes its name to the cluster of grandes écoles and prodigious universities such as the Sorbonne in the area, and for many decades classes were taught only in Latin.

Your guide will take you to Saint-Germain-des-Prés, between the Invalides and the Jardin du Luxembourg. This district has always attracted the great writers, photographers, painters and artists of yesterday and today. The literary and intellectual atmosphere is still felt.

You will discover surprising places like the Café de Flore dating from 1885, meeting place of Guillaume Apollinaire, Simone de Beauvoir, Jean-Paul Sartre, Ernest Hemingway and Albert Camus, the Café des Deux Magots of 1873 frequented by Verlaine, Rimbaud, Elsa Triollet, and not to mention the famous Lipp brewery of 1880 which hosted important literary and political figures.

Many theaters and major brands such as Yves Saint Laurent, Louis Vuitton, Christian Dior, Cartier and Hermès have set up in this chic and renowned district.

Apart from these mythical places, the 6th century Abbey of Saint Germain des Prés, better known as Saint-Denis, is surely worth a look! This building, a former royal necropolis, erected at the request of Childebert, 1st son of Clovis and Merovingian King, has experienced many setbacks.

In the 9th century, the Normans looted and burned the Abbey. After being destroyed, it would then be rebuilt in the 10th and 13th centuries. In the 12th century. A new Gothic-style choir was built. At the same time, not far from there, the construction of Notre-Dame Cathedral began.

During the French Revolution, the buildings served as a refinery and saltpeter.  After returning in 1803 into a dismal condition for worship, the architects Godde and Baltard undertook major restoration work while retaining the original Romanesque style elements.

Whether you are passionate about history, art, beautiful stones, culture or the world of fashion, Saint-Germain satisfies all the curiosities of visitors!

Your guide will direct you to the place Furstemberg, with its discreet charm with its lamppost with five globes, the rue de Buci opened in the 13th century in memory of the first President of the Parliament Simon de Buci, the rue Saint-André des Arts, historic and unusual.

You can admire the Place de l’Odéon, where the Théâtre de l’Europe is located, and where the Procope, one of the oldest restaurants in Paris, is established. Founded in 1686, this palace had the privilege of welcoming Voltaire, Diderot, Rousseau, Robespierre, Benjamin Franklin…

This route specially designed for you will take you to the Saint-Michel district, steeped in history and heritage, where you will contemplate the Senate, the Luxembourg Gardens and mansions from the 17th and 18th centuries.

The fountain in Place Saint-Michel, listed as a historical monument, remains a must-see in the 6th arrondissement of the capital. Its huge statue representing the Archangel Saint Michael, the marble columns and the two chimaeras offer a spectacular view.

Did you know that this work was produced by Gabriel Davioud, Architect at the request of Georges Eugène Haussmann Baron and Prefect of the Seine?

At the crossroads of Boulevard Saint-Michel and Boulevard Saint-Germain is the National Museum of the Middle Ages founded in 1843, called Musée de Cluny. Close to Notre-Dame de Paris cathedral, this museum is a flagship of medieval architecture.

The republican temple is 110m long and 84m wide and of different styles, namely, Gothic, Byzantine, classical, ancient Greek. Since the French Revolution, it honours the memory of great figures of the nation and figures of the Resistance. This place contains many burials including that of Victor Hugo, Voltaire, Rousseau, Marie and Pierre Curie, Braille, Zola, Malraux, Simone Veil …

Treat yourself through this day open to everyone, family, group of friends, association perfectly suited to children! You will experience an instructive adventure, intense and thrilling. 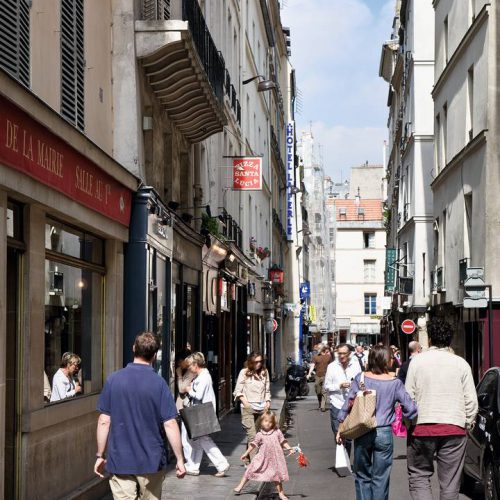 You will arrive in the heart of the left bank, in Saint Germain des Prés. Your guide will welcome you at the Saint Germain crossroads, the starting point of the guided walk. It is also an emblematic Parisian place where the well-known cafes, restaurants and brasseries are located, such as the Café de Flore and its neighbour the Deux Magots. Opposite, the no less famous Lipp brewery which welcomes a large number of French and international personalities. The visit will lead you to the abbey of Saint Germain des Prés founded in the 6th century, the Charming Place Furstemberg, the rue de Buci and its shops, the rue Saint André des Arts, the Saint André commercial court which will lead you to the crossroads of the Odeon. You will, then, head to the Place de l’Odéon where the Théâtre de Europe is located.

(Around) Lunch in the neighbourhood in a restaurant with a typical Parisian atmosphere.

You will continue the walk in the heart of the Saint Michel district towards the eponymous Luxembourg Garden of the palace which houses the Senate, you will then go up Avenue Souffloto which will lead you to the Pantheon where the great men and women of the nation rest. Then, you will continue your walk to Sorbonne University, the National Museum of the Middle Ages and the Place Saint Michel, which is located a stone’s throw from the Notre Dame de Paris cathedral.

End of our services.