GUIDED WALK FROM THE PLANTS GARDEN TO THE PANTHÉON SQUARE

The personalised tour of the Parisian landscape, around the Mouffetard District, accompanied with a state-certified private guide, will transport you to another time.

Located on the right bank, in the 5th arrondissement, the Plants garden, covering an area of 24 hectares and the historic heart of the National Museum of Natural History, is home to 4 centuries of history!

Every year, many visitors, researchers, naturalists and the curious come to discover this remarkable place of preservation and research.

In 1626, Louis XIII order to create a royal garden dedicated to the cultivation of medicinal plants and confide this task to his doctor-botanist, Guy de La Brosse ( 1586-1641)

In 1636, Guy de La Brosse continued to decorate the park and after years of work, the space was inaugurated in 1640 and was opened to the public. It would be a great success and would become an educational cradle, thanks to the courses in anatomy, plant biology and pharmaceutical chemistry given free of charge in French.

Georges Louis Leclerc, naturalist, better known as the Comte de Buffon (1707-1788), who held office until his death, remains one of the most renowned directors of the Royal Garden. It is thanks to his dedication that the scientific research center would become the most important in Europe. In 1793, by decree of the convention, this establishment was made a National Museum of Natural History.

All the buildings bring together the gallery of evolution, the zoo opened in 1794, living plants, insects, vertebrates as well as various prehistoric pieces, rocks, minerals, fossils, etc.

During your walk in this green setting you will discover various and varied plant species, historic trees such as the pistachio tree, over 300 years old, the Wollemi pine, the square greenhouses built in 1834-1836, the tropical forest greenhouse 1935-1936…

Enjoy a rich, sensory experience and a world tour in the heart of Paris with specimens from China, America, Asia, Japan, Lebanon, Crete and several continents! This outing will delight young and old alike.

Nearby and as an extension of your route, you can admire the Great Mosque of Paris, located in the Latin Quarter. Its Hispano-Moorish architecture, its colours and mosaics reveal a breathtaking whole!

Built by craftsmen from the Maghreb from 1922 to 1926 in honour of the Muslim soldiers who died for France during the First World War, this place of worship will captivate you!

You have the possibility, on request, to continue your visit to admire the interior and discover all the beauties that this Mosque hides. From Persian rugs, to the gigantic cedarwood door, library, the garden of delights through history, this oriental building takes you on a fabulous cultural and intellectual journey.

Accompanied by your guide, you will head to the Arènes de Lutèce, built in the 1st century AD. These Gallo-Roman remains, listed as Historical Monuments, are part of one of the oldest buildings in the capital.

Destroyed during the barbarian invasions, some traces of the Roman Empire are still visible: the lodge of the actors, the stage platform where the fights of gladiators and beasts took place, the niches…

Destroyed, Victor Hugo intervened with the President of the Municipal Council of Paris in 1883 so that these archaeological remains, witnesses of the past, could be restored and brought to light.

You will, then, arrive in front of the Pantheon, crowned by a dome 83 meters high, the first stone of which was laid by Louis XV Jacques-Germain Soufflot, Architect, began work in 1757.

Did you know that this neo-classical building was originally a church intended to keep the chest of relics of Saint Genevieve, patron saint of the capital?

This republican monument has undergone many upheavals, a temple of the fatherland and then a new church, to finally obtain the status of Pantheon in honour of the great personalities of the French nation.

Book this tailor-made day filled with cultural and original effervescence with family, group or friends. A great adventure awaits you! 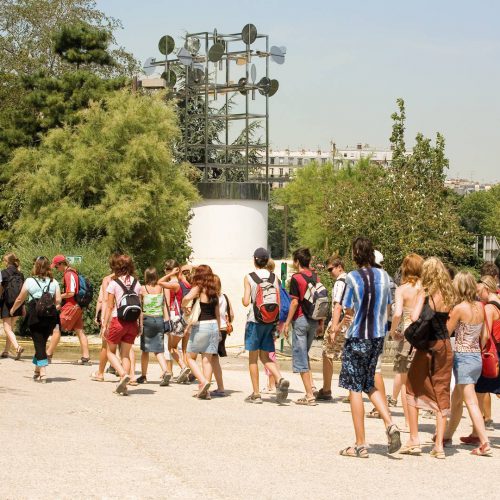 You will be greeted by your guide upon your arrival at the gates of the Jardin des Plantes on the Seine side, left bank of Paris. It is undoubtedly one of the most popular parks in Paris, for its diversity and origin. The guided walk will begin with the historical presentation of the park and the 24-hectare botanical garden.

It was on the orders of Louis XIII that Jean Héroard and Guy de la Brosse, the king’s doctors, created the garden of medicinal plants on the current site, which opened to the public in 1640.

Free courses are given there such as botany, pharmaceutical chemistry and comparative anatomy. Saved during the French Revolution, all the buildings in the Jardin des Plantes are home to, among others, the National Museum of Natural History, the Great Gallery of Evolution, the Menagerie which is the historic Paris zoo that opened in 1794, the greenhouses tropical. In total, hundreds of millions of pieces including a few thousand living plants and plants gathered in herbaria, 200 million insects, more than a million vertebrates and prehistoric objects, rocks, minerals and fossils are kept there.

Lunch in a neighbourhood restaurant.

You will continue your walk along the mosque of Paris, in Hispano-Moorish style, then you will cross, nestled between rue Linné and rue de Monge, the arenas of Lutèce, Gallo-Roman remains from the 2nd century which will lead you through a passage towards the heart of the Latin Quarter, the place of the counterscarp, the Panthéon, where the great characters of the history of France are buried. Although the list is not exhaustive, Pierre and Marie Curie, Victor Hugo, Voltaire, Jean Jacques Rousseau, Alexandre Dumas, André Malraux and more recently Simone Veil rest there.

End of our services, the coach will be waiting for you nearby. For those who wish, it is possible to continue this walk towards the University of the Sorbonne, the Place Saint Michel, the Notre Dame cathedral.