Wish to treat yourself with a Parisian trip out of the ordinary ?

Enter the backstage of the stained glass house and the Paris Mint for an unique experience in these artistic workshops!

The stained glass house was founded in 1973 by Christiane and Philippe Andrieux and is situated in Paris in the 15th arrondissement, which is rich in industrial heritage and an ancestral savoir-faire recognized worldwide.

The parents of Emmanuelle Andrieux have passed on the passion for crafting stained glasses to her. She has taken this familial business in her hands and offers her services to restore and create stained glass windows from the simplest to the most complicated form.

The technique of blowing glass was initiated long ago by the Roman Empire ! The savoir-faire never stopped progressing over centuries. During the Middle-Age, the stained glass would experience a golden age thanks to the building of many edifices.

Today, even if this noble job of crafting this material has not changed much since the Middle Age, this job, registered since 2019 in the repertoire of the immaterial cultural heritage inventory, remains uncommon. That is why, the visit of the Stained-glass House, certified Living Heritage Company, is a good way to discover or rediscover this complex art.

Philippe Andrieux, speaker and Master Glassmakers president, redrew the history of the most beautiful works and creations of the stained glass windows around the world. In the workshop, you will be able to admire the talent of the craftspersons who master perfectly the technique of lead stained glass and that of Tiffany joints executed with copper wire soldered with tin.

These artists will unveil to you the different phases of production; how they cut, polish and assemble each piece of glass with an extreme rigour until the painting or dyeing. You will be enthralled by these beautiful pieces which are exposed in the gallery.

Thanks to the fame which it has acquired, the Stained-glass House was entrusted with the restoration of an exceptional piece: the cupola built in the 19th century by Gustave Eiffle which is contained by the Vernet hotel to Paris.

The Stained-glass House demonstrates a wish to safeguard and preserve the integrity of the job. That is why it organizes introductory courses open for everyone. Let yourself be charmed by this visit and enjoy this exemplary savoir-faire.

The Paris Mint : A strongbox accessible for public

The Paris Mint, created on the 25th June 864, is the oldest business of the world and the oldest institution of France, and is still functioning. Visit the 11 Conti of the Paris Mint, its 12 centuries of fascinating histories and its remarkable architectural heritage !

Charles le Chauve (823-877), the king of the western Francie, grandson of the emperor Charlemagne, promulgated an edict : the Edict of Pitres. This action stipulated the denarius production rules as well as the list of the taping places, including the Paris workshop.

The building of the edifice, both a Palace and a factory which you can still admire today, started in 1771 (foundations of 1769). King Louis XV gave the mission to Jacques-Denis Antoine, architect, to design a new coin hotel in front of the Louvre and the Nine Bridge.

That is how the establishment, officially set up on the Conti quay in the 6th arrondissement on the 20th of December 1775, is born. From september 1796, it was linked to the ministry of the economy, the finances and the Industry.

In January 2007, the Paris Mint became an Industrial and Commercial Public Establishment and obtained, in 2012, the label of Living Heritage Company.

This palace of neoclassical style with rectilinear forms and garnished with wonderful ornamental sculpture has kept all its splendour. The building contains, from now on, a museum devoted to the metal art, a shop of art products, currency collections and a variety of workshops, where a collection of coins, honour medal jewels and objects are created.

Since 2017, the Paris Mint has opened its doors to present you its production secrets through a ludique and interactive experience around metal work. Discover also the work of many trades: engravers, modellers, chiselers, minters, stampers…

You will be able to admire the historical devices, the currency collections, art products, works, french and foreign medals, paintings, sculpture… From metal mining to hammering, the mechanical press and the techniques evolutions, currency production will have no more mystery to you.

This fascinating, fun and didactic day will offer privileged moments to share in family, couple or group, in must-see places.

The programme is defined as follows : 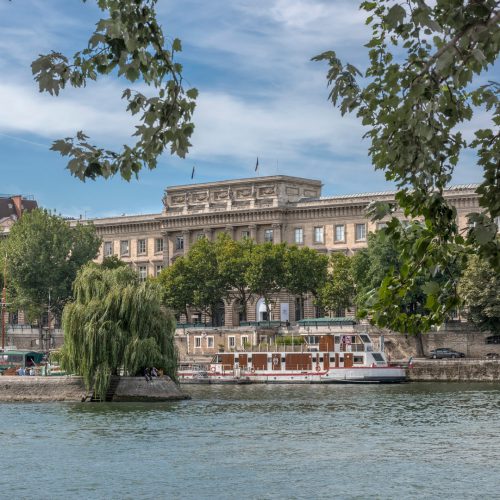 Departure by coach towards Paris.

You will be welcomed by your speaker, Master Glassmakers president at the globally famous Stained-glass House, situated on the 15th to Paris.

For almost 2 hours, you will immerse in the history of one of the most beautiful works and productions in the world – from the legend of the phoenician merchants at the edge of Belus, who discovered, while cooking their meal, this strange substance known as glass, to the Chambord castle, and more recently during all the 20 century.

France, alone, is representative of around 60% of stained glass windows in the world.

While the handiwork of the glass art jobs are registered since 2019 to the repertoire to the inventory of intangible cultural heritage, the restoration work is a real puzzle.

Lunch in a restaurant in the vicinity.

The afternoon will continue with a visit to this neoclassical palace, the 11 Conti which contains the institution of the Paris mint and a museum dedicated to the metal art. You will be guided across the rooms which will present to you the collections of one of the last active coin manufacturers in the capital.