Visit of the Yves Saint-Laurent museum & the Palais Galliera

A day around fashion & fashion museum

Yves Saint Laurent Museum & the Palais Galliera in Paris, the capital of fashion and a known heritage for elegance, have always attracted new designers and great couturiers. Whether you are passionate about the world of haute-couture or not, this tour which is presented by an accredited guide will amaze you.

Yves Henri Donat Matthieu-Saint-Laurent, better known under the name of Yves Saint-Laurent, was born in 1936 in Oran (Algeria). In 1955, he joined the School of the Chambre Syndicale de la Couture Parisienne in Paris. Shortly afterwards, Michel de Brunhoff, director of Vogue magazine, discovered his talents and arranged a meeting with Christian Dior who immediately hired him as his assistant.

When Christian Dior passed away in 1957, Saint-Laurent, aged 21, became Artistic Director of the house. It is at his mentor’s funeral that the young innovator will meet the man who will share his life until his last breath, Pierre Bergé, stylist at Dior.

The first models created for the spring-summer collection, the “Trapèze” line, were presented during its first show in January 1958. The more modern, comfortable, light and less fitted dresses were unanimous and were a resounding success.

Yves Saint-Laurent found himself hospitalized for depression and refused to do his military service. The DIOR house fired him in 1960. He then founded his own fashion house with his partner. The YSL logo was created in 1961 by the graphic designer Cassandre.

This fashion aficionado, renowned over the world and a true revolutionary in the female and male wardrobe, would reign supreme. In 2001 he announced the end of his career when he presented his last collection. The house closed in January 2002. Yves Saint-Laurent passed away on June 1, 2008, and Pierre Bergé on September 8, 2017.

In 2017, the Museum, located on Avenue Marceau, in Paris (16th arrondissement), opened its doors, at the very place where countless creations have emerged over nearly 30 years. This establishment, the first of this scale dedicated to a prodigious couturier, has received the Musée de France label.

Over more than 450 m², you will discover, through temporary exhibitions, videos and retrospectives, the couturier’s works. This museum offers you a full picture of the career of this man who deeply marked the history of fashion by freeing women from the gender bias associated with dress codes of the time.

Yves Saint-Laurent’s studio office placed in a situation for visitors where his famous glasses, his personal items, his dog’s water jug, his photographs, his pencils rest … gives the impression that at any time the artist will arise! Pierre Bergé’s office, fitting mirror, workshops and salons for future clients are also worth a detour.

Among all the pieces on display, you will have the privilege of discovering the prototypes, the flagship creations, tuxedo, Saharienne, jumpsuit, trench coats, the memorable transparent black muslins and the famous geometric Mondrian dress, designed in 1965, in homage to the painter Piet Mondrian. The letter “M” that you will notice on some of these old sketches means “Museum”, proof that at the time he was already considering a heritage approach.

A second fashion museum is also in the pipeline, Le Palais Galliera. Marie Brignole-Sale (1811-1888), Duchess of Galliera, eager to showcase her collection of artworks, called on Paul-René-Léon Ginain. From May 1879 to February 1894, the Architect erected a Renaissance-inspired palace near the most amazing windows of Avenue Montaigne and Faubourg Saint-Honoré.

This magnificent building had various functions before being dedicated to fashion: museum of industrial art, galleries of paintings by illustrious painters and auctions until 1977. After having issues with the republicans in power, the benefactress sent her collection to Genoa while the building was bequeathed to the city of Paris.

Renovated, enlarged and enhanced in January 2020 by the architect Dominique Brard, this establishment remains the only palace museum in France to offer permanent collections in addition to temporary exhibitions. A basement of 670 m² houses more than 200,000 items dating from the 13th century till the present days.

You will also be able to contemplate different styles of clothing ranging from sportswear to the most splendid and fragile clothes of the time, accessories, underwear, models of designers, great couturiers and even unbranded items.

Countless illustrations, a collection of photographs, pictures, books, advertising catalogues and graphic art documents complete the rich exhibition. The Palais team has thought of everything while offering activities and workshops for children and adolescents.

As you can imagine, this tour takes you behind the scenes of fashion. It is a good opportunity to share this experience with family or friends and this can also be organized as part of a school, professional or association outing. 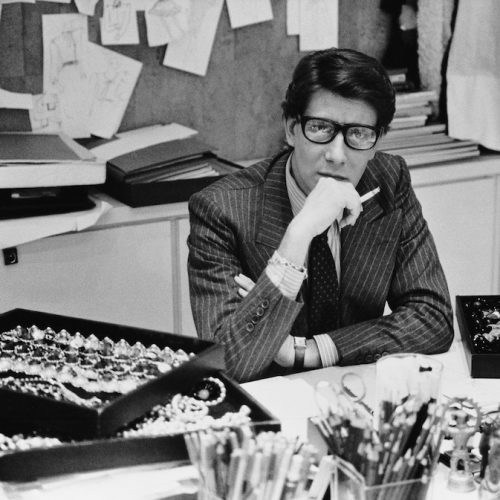 (Around) Departure by coach

Lunch in the neighbourhood, different cuisines will be offered suited for all budgets

(Around) Visit the Palais Galliera, the fashion museum of the city of Paris, located a few minutes walk from the Yves Saint Laurent museum.